Bungee Stickmen 2010: Space Edition is pretty well explained by its title alone. It is an physics based game for the iPhone/iPod Touch where you indirectly control a little stick figure that jumps from various platforms in a variety of locations. I say indirectly control because all you really do is choose the length of rope that the stickman uses on each jump. The closer your stickman gets to the ground the more points you earn. You must earn a certain amount of points to move on to the next level. 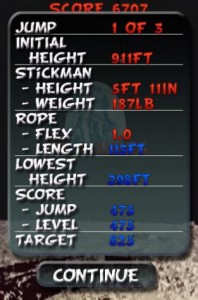 There are several variables that change to make each level different. The platform height is main variable but the stickman’s weight and height also change. One other variable that changes in later levels is the rope flex factor (the flex factor is set at 1.0 during early levels then changes to try to throw off your guess).

As far as gameplay goes, there isn’t much. All you do is slide a bar that selects the rope length then press a button that says jump. That’s it.  The challenge is trying out whatever you would like to on your first jump and adjusting on the following 2 jumps.  In fact, the games gameplay and its strength of challenge are both fairly poor.  The levels within the game play exactly the same regardless of the setting.  Set the rope length, click a button.  Watch the result.  It’s pretty tedious and not likely to keep your interest for very long. 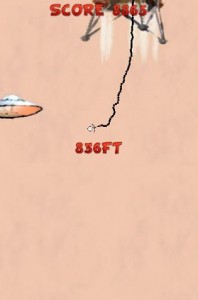 Bungee Stickmen, 2010: Space Edition is a game with a great concept but came up short on everything else. I would like to see a remake with more interactivity and controls.  Some iPhone and iPod Touch games come out that only have a single developer yet feel incredibly polished, balanced, and fun.  This is not that game.