Starball is a simple game for the iPhone and iPod Touch where you roll around a green ball and gather stars. The obstacles are little red balls that move both horizontally and vertically.  If you run into one of these red balls the game is over. As time goes on more red balls are added so you must maneuver around them to keep gathering stars. There are also extras (gold circles with question marks) that pop up along the way to help you out. These extras include: clairvoyance, slowmo, invincibility, shrinkage (do women know about this?), the ability to freeze time, star beam, and even a power up that erases all of the red balls. 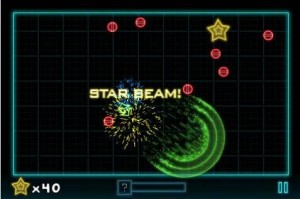 The game play is probably the best part of the game…it is incredibly easy. You just tilt your device and the ball rolls. It can’t get much easier than that. There are three difficulty levels to choose from, beginner, normal, and insane.  Par for the course, the higher the difficulty, the more difficult it is for you to maneuver around the red balls.

The graphics are great. There are even three different graphical themes to spice up game play. Vector is my favorite. The audio is good as well, with two techno options. The sound FX are simple, yet easy on the ears. 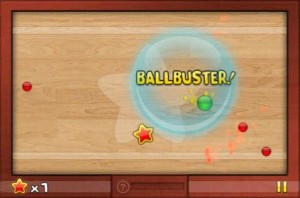 My honest opinion is that this is a fun game. With that said, there isn’t much to it. If you want a game that you can play when you have a spare five minutes here and there, then this game is for you. If you are looking for a game with hours and hours of gameplay, you should probably look elsewhere.