If you’re unfamiliar with the Spore universe, it was Will Wright’s (The guy behind both SimCity and The Sims) final game he created while at EA. The general scope of the PC game took you from being an incredibly small single celled organism, to eventually building up your species through a series of evolutions into a galactic traveler/dominator. When EA Mobile brought Spore Creatures to the mobile, it was done on a much smaller scale but with the same basic principles. You design a creature and take it from its infancy to be the dominant creature on the planet. 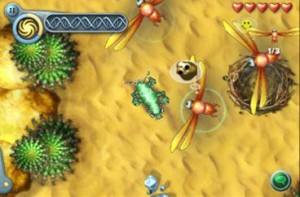 One of the first things you will notice when loading the game is that the color palette is fantastic.  Every color is bright and rich and gives an almost cartoon feel to the world.  The gameplay revolves around you creating a new species and evolving different traits in order to be able to kill or socialize with other species in the world.  It is entirely up to you what type of species you will create.  Will you create a creature with spikes for a tail and razor sharp teeth?  Or will you create a character that is extremely defensive based and can socialize with the best of them?  The choice is yours and that is one of the best parts about the game.

The game revolves around you moving your character through a series of levels and finding ways to evolve.  Eating smaller creatures, finding other species and either socializing with them or fighting them , and even killing bosses on each of the four levels will move you character closer to inter-species dominance.  You have quite a few choices as you move through the game about how your character will look and what traits you have.  Those traits will help you determine whether or not you should fight a new found species or socialize with them.  However, the choices are much smaller than the PC version of the game and no matter what you choose to do; you cannot interact with other users throughout the Spore Creatures world.  This is a single player game only. 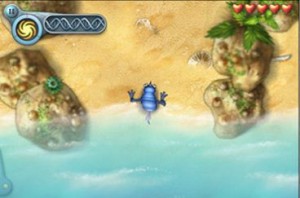 The controls are done by tilting the device in the direction you want your creature to slither, crawl, or walk.  There are a few additional buttons on the screen, one of which is the action button.  To eat food, simply guide your creature towards it and it will lunge forward to grab it.  While the competing creatures are often cute, there isn’t much substance to the world.  None of the creatures create societies, compete for resources, or are on their own missions for world dominance.  Apparently you are the only one that has aspirations for world domination.  The end result, it feels kind of empty and doesn’t really sit well for me.  I had gone in expecting to find a world like Civilization; instead I found something much simpler.

The music and sound are very well done.  In fact, the entire game is very well produced but it seems like an empty shell of what it could have been.  The game gives you about 2 or 3 hours of content.  Of course, some of would say that there are limitless possibilities since each time you can create a new character.  That isn’t the case.  The world is the same every time you load it up.  The same species, the same levels, the same bosses.  If it contained some dynamic engine to load up other user’s content, that would have been a joy, but sadly it is not the case.  Once you go through the four levels, there really isn’t much else to do. 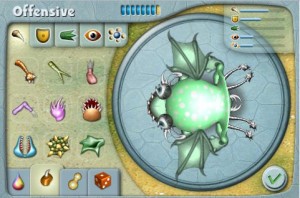 Spore Creatures isn’t a bad game but it feels like it could have been much more.  For $6.99, I say to pass unless you are someone that really enjoys casual gameplay.  In fact, the best market for this game might be the Touch users out there that fall into the Teen category.  For us adults and/or people who like more of a challenge, I recommend Civilization Revolution.