Dracula: Path of the Dragon – Part 1

Dracula: Path of the Dragon offers something few iPhone/iPod games do. A great story, fantastic voice acting, and believable characters.  In fact, few iPhone/iPod games have any of those qualities, let alone all of them!  That is why it was such a treat to play this adventure game based on a PC game of the same name.  Several things should be noted up front.  This game is divided into 3 parts and thus this review only deals in part 1.  I will be reviewing the second and third parts separately.  Look for those as they become released.  Secondly, even though the game is based on a PC game by the same name, the story and actions you take are quite different. 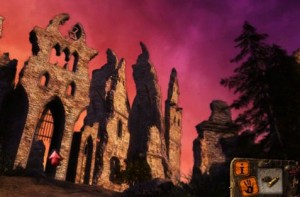 The story begins with you investigating a possible canonization of a saint.  If you’re not of the catholic persuasion, I guess the deal is that the Vatican sends out an investigatory team when a person is up for being included in the sainthood.  You play a priest that travels to Romania (specifically the Transylvanian area) to speak to friends/followers of the recently deceased, potential saint.  At first, you begin asking questions to find out more about her character and Christian faith.  Later, the tale takes a turn and that is when things become very interesting.

The gameplay itself involves you using your finger to point at objects and directions you would like your character to move.  This is done in first person view.  Please do not go in expecting a FPS or an action intense game; this is an adventure game through and through.  You solve puzzles; speaking to quite a few different characters and do it all without a gun.  Instead you carry a Crucifix and a Bible.  There are also several puzzles within the first part of the game that require you use various objects together in order to solve a problem.  This is a pleasure because they are well constructed and easy enough to understand if you pay attention. 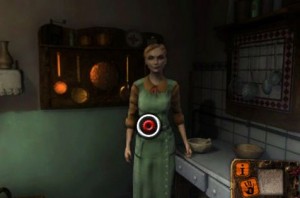 The graphics and sound within the game are phenomenal.  The graphics are a mix of 2d backgrounds mixed with 3D cutscenes and are done extremely well.  The actors are all voiced in the game as well and sound fantastic.  It is worth noting that though the game is set in Transylvania, the actors carry no noticeable accent.  For some of you that may be disappointing, but for me I was happy that was the way it was done.  I figure that since most actors aren’t from that area of the world, trying to sound Transylvanian would just come off sounding hokey. 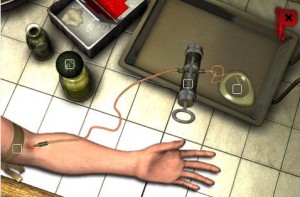 The game goes for just a buck and it lasts for a solid 2 hours or so.  It certainly doesn’t have much replay value but trust me when I say that by the end of the first part of the game, you will be more than willing to lay down some more coin to see where the story goes.  This game is like a great book that really sucks you in, and it is fantastic to see something so deep and believable come to the iPhone/iPod.