Assassins Creed 2: Discovery on the iPhone and iPod Touch plays a lot like an action game that wants you to think it is something else.  To give you a little background, Assassins Creed 2, like the first game, takes place in the past with you as an assassin.  Its plot is actually weirder and more complicated but let’s just goes with that.  As an assassin you need to be stealthy in order to not get overwhelmed by your enemies, right?  In theory yes, in practice no.  In fact, the game forces you to be stealthy without giving you any reason to do so (other than losing missions) and therein lay the problem. 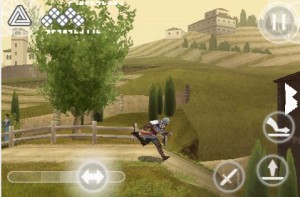 I assumed that as an assassin you would have nothing but your wits and a blade to help you but in this game, you are as fleet footed as an Olympic gymnast, you possess the brute force of a wrestler, and you also have the grace of a ballet dancer.  You can scale 100 ft walls with no problem, jump from 50 ft into hay stacks in order to break your fall and hide.  You have the ability to do incredible jumps and run as fast as Usain Bolt but remember, you’re also a stealthy assassin and the developers don’t want you to do these things to beat levels, they want you to walk slowly and sneak up on people to kill them.  If that’s the case, why give you the ability to do these things at all?

With all of the above qualities your character possesses, if you want to go all out and stab someone straight on while they see you coming, you should be able to do it.  But that is not always how it works in this game.  During a level that makes you be stealthy, you can only kill people while they see you coming several times per level.  If you do it too many times, the level ends.  For example, if you kill the 5th person in a stealth mode level and they noticed you were coming before you killed them, sorry -restart from the last checkpoint.  It’s annoying and stupid.  If you need to be stealthy, why give your character superhuman strength and the ability to literally kill four or five enemies at once?  The stealth mode feels like an add-on on that doesn’t make sense and is not fun. 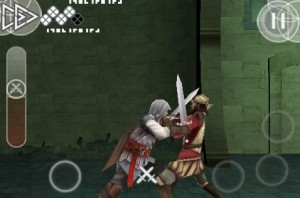 The gameplay itself revolves around you using a slider on the left side of your iDevice to move your character forward or back.  There is no up and down controller because this game is strictly a side scroller.  There are additional buttons for jumping and knifing your way through an enemy.  Just because the game treats you like a child and forces your hand when it comes to being stealthy doesn’t mean it’s not fun.  In fact, the game can be a blast at times.  When you do kill someone silently, the game gives you a great 3D cutscene of you slitting a neck or stabbing someone through the chest.  There are quite a few varieties and you can even counter an opponent’s attack and kill them in fantastic fashion.  However, even this coolness is not without its own drawbacks.   There is no blood in this game.  To me it doesn’t make any sense.  There is blood in quite a few other iPhone/iPod Touch games and its lack here in such a violent game doesn’t make sense.

The graphics in the game are ok.  The close up killing looks great but the rest of the game is nothing special.  While your character tends to look pixilated at times, most of the backgrounds and settings are well done. All said its graphics are not nearly up to the level of GTA: Chinatown Wars or even Spore Creatures.  For a $10 game, I expected a bit more.  The sound in the game is fairly well done.  Most of the words said throughout the storyline are actually voice acted within the game.  That was nice to see as most of it is done quite well.  The soundtrack as well is spot-on and works well within the game’s setting and story.

When it comes to replay value, there are quite a few things to keep you busy.  There is a minigame thrown into each level that involves you ripping the wanted posters off the walls throughout the city streets.  Stats and feats are also tracked within the game and you also have the ability to unlock cheats (called “animus hacks” within the game).  After beating the game and its 8 levels, you also unlock a series of challenges that will help to keep you busy.  Certainly the game should give you 4 or 5 hours of play time which may or may not be worth $10 in your book.

Though the stealth missions are incredibly annoying, the other missions do help make up for them.  The chase missions (where you are being tracked down by many guards) really shine and give you a reason to try to play through some of the more annoying parts of the game.  The sad thing is that the best part of the game, the murders, has been made much less important by the developer.  You either can’t kill someone straight on or if you can, you have to do it extremely quickly.  In the end, the game has its ups and downs.  Don’t buy it before picking up the much superior GTA: CW but this game will keep your thumbs busy for a while as well.  One additional note.  I have seen other reports that this game doesn’t fare too well on anything less than an iPhone 3GS/newest iPod Touch models so beware of that.