In my time spent playing Vanquish: Oath of Brothers I have felt a wide range of emotions.  At first I was bored, then I was interested and finally I ended up feeling somewhere in the middle.  The game certainly has its strengths but has a few faults that counter balance them and keep it from being a classic.  You play 1 of 3 characters in the story that takes place in the ancient Chinese empire (during the Han dynasty).  In that role, you fight to the death over and over and over again.  Gamevil calls this an action RPG and it does have elements of an RPG, but don’t be fooled, this game is nearly all about the action. 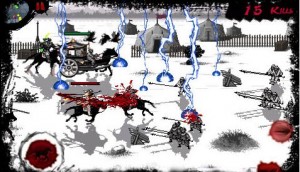 The gameplay revolves around you riding on a horse through the countryside of China killing off whoever gets in your way.  The game is divided into a number of levels that once you beat, you never return to.  The actual gameplay is unusual because even though you are constantly moving forward (there is no way to stop entirely or go backward), you do have the interesting ability to slow or slightly turn your horse riding character left and right.  This game is a side scroller so the ability to turn is intriguing.

On the left of the screen you have you d-pad control and on the right side your attack buttons.  One button is your primary weapon, which you need to be ready to push a million times (literally).  You will be killing 300-500 people in a single level and these things only take 5 minutes each at the most.  The gameplay is really quick.  In fact, it is really hard to see what you are doing on the screen at any one time.  The problem is you aren’t just fighting foot soldiers.  You are also fighting horse riding enemies and occasionally protecting a horse drawn carriage.  Sometimes there are as many as 20-25 enemies on the screen at once including 5-10 horses.  That is a lot of legs to see on a screen as small as an iDevice, making it extremely difficult to tell where you horse is, especially since the graphics can blend in. 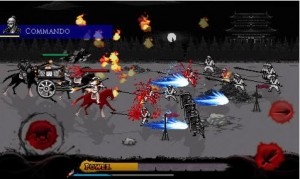 The graphics in the game are interesting.  They are hand drawn and sometimes quite beautiful, other times they end up looking drab and monotonous.  In fact, when you start turning they can become very pixilated and truly look bad.  It is worth mentioning that the blood you see upon killing your enemies flies everywhere and it is very satisfying to see.  Especially after coming off playing Assassin’s Creed 2 and seeing no blood at all.  The music within the game is done well but unfortunately is not turned on throughout your playing time.  While playing you simply hear the sound of your main weapon constantly coming up against your enemies which makes a clanging noise that gets old after a while.

The actual storyline within the game is done fairly well.  It is truly one of the bright spots in the game.  It makes sense, develops your character and even made me laugh several times (intentionally I think).  It certainly feels that some time was spent on the story and that is a very good thing.  None of what is said is done by voice actors, closed caption only here, but that doesn’t really detract from anything in this case. 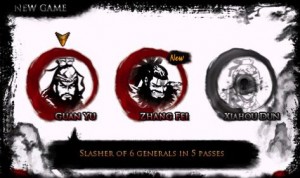 The main issue with this game again comes down to the pace, which is much too fast in most cases.  While there is a slider in the options menu to speed the game up or slow it down, it doesn’t really seem to help too much.  There are still a ton of enemies in every screen and finding yourself is still a difficult proposition.  If they could have made your character stand out more I would have given much higher marks throughout.

One other thing that also needs mentioned is the difficulty level.  It gets too difficult, too quick.  I was going through the levels as the first character in the game and moving through them quite smoothly until I got to level 7 and tried to fight the boss character.  That battle took ages for me to win and repeating the entire mission over and over again to get to that battle was not fun at all.  Normally, you could “revive” yourself with a purple gem in the game and go right back into the battle against the boss character.  In this instance, things had been so easy up to this point; I was using the purple gems to upgrade my character.  When I died, I had no purple gems left to use and so I had to restart the entire mission over and over again.  Not fun. 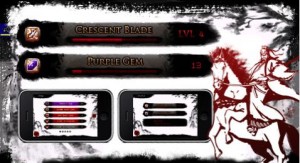 The upgrade system for your weapons and all of the additional powerups you can find/receive/buy can make the game quite a bit of fun.  Each has its advantages and disadvantages and knowing when to buy an item (with one of the aforementioned purple gems) is an important thing to learn.  Overall, this part of the game feels entirely right and is done quite well.  You can even buy a better horse (which seems to make the game go even faster).

In summary, Vanquish: Oath of Brothers has a strong story, a great powerup/item system and an interesting use of controls and graphics.  It also gives you several hours of gameplay.  On the negative side its difficulty level raises too quickly, is extremely difficult to find your character in the mass of enemies surrounding you, and can become repetitive.  As an action gamer, I think this game is worth your time.  As a fan of RPG’s, you might want to wait until Zenonia 2.  This game is probably not going to be a good fit for you.