Moto X Mayhem is a timed 2D dirt bike game where you race through various landscapes trying to not crash your bike along the way. There are 3 sets of levels, each includes 7 different tracks. There are a few flash games out there that are very similar to Moto X Mayhem but when it comes to the iPhone/iPod landscape, Moto X Mayhem is very well done and stands apart from its competition. 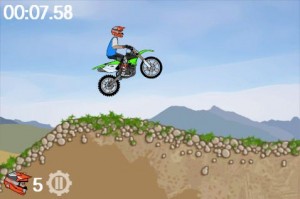 Right off the bat you can start a game or practice one level at a time. Normal game play allows you to go through each level unlocking tracks by passing the previous one. After passing the entire track on a level, your total level time is shown and can be added and compared to the network of players. You can also access personal high scores from the main menu.

For a 2D racer, Moto X Mayhem has great graphics. The bike and rider show great detail with every movement the player makes. I believe the best graphics in the game are the tracks and backgrounds. They are a perfect match between high quality and simplicity. I especially love the buried skeletons with helmets on. Nice touch. 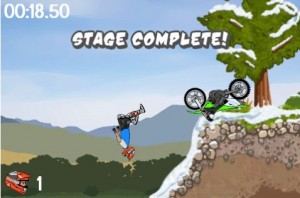 The game’s sounds take a back seat to the graphics and game play. There is no music during game play (which I like), instead it plays only while the user is on a menu screen. While racing the sounds consist of engine noises, bird chirps, and crashing sound FX. I do like the fact that the engine noises are matched very well with the bike’s acceleration and jumps. 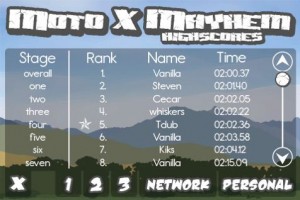 There are a few things like I didn’t like about this game. I’ve already passed all of the tracks on all of the levels. It didn’t take long. Yes, there is the aspect of going back through and trying for a better time, but once you get the hang of the controls you will fly through the tracks. I would like to see an upgradeable bike and longer tracks. They only take 18-20 seconds to get through.

With all that said, Moto X Mayhem is still a very fun game, definitely worth the $0.99 price tag. The replay value is there, but I think the most fun you will have is trying to get through the tracks the first time you play the game.