Tower Defense EVO is an iPhone/iPod Touch game where the point is to destroy wave after wave of soldiers and vehicles trying to reach your base.  The more units you destroy the more money you earn for a better arsenal.  You can choose between mission based gameplay where after so many levels you can complete a mission, or you can choose the “endless” version where the enemies just keep on coming forever. 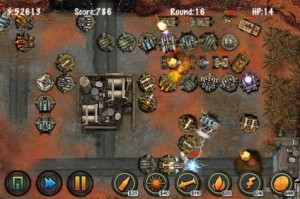 The controls on Tower Defense EVO are really simple.  They are of the drag and drop variety.  Simply pick the gun you would like to use and place it where you think it will be most effective and let it run wild.  If you get bored with said gun, or would like to just update it, you are able to sell it and upgrade the weapon.  I should note that the instructions on the front of this game went by VERY quickly and did not give me nearly enough time to read through them before getting started, so I had to try a lot of trial and error.  The end result was quite a few early losses but honestly even the losing was fun, which is always the sign of a good game.

For a game that is played on a screen less than 4 inches wide, the graphics and details of the images are incredible. You really get a satisfying view of your entire arsenal of weapons filling the sky with ammunition.  It is also nice to see some pretty good detail of your attackers well in advance.  The background music is a good choice as well.  The only thing that became a little annoying was after a few levels the audio is constant gunfire, which made me turn it off after a while. 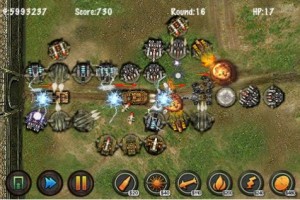 It may be because I’m a sucker for tower defense type games but I really enjoyed this one.  This game is well worth the asking price and honestly I would probably pay up to $5 for it just because I love a challenge that brings me back over and over again.  Tower Defense EVO stands apart from other games in this genre with its excellent graphics and wide assortments of armaments at your disposal.  Do yourself a favor and pick this one up.