The number one rule of any iPhone/iPod Touch game should be that the average user should be able to play much of the game without quitting in frustration over and over again.  Actually, I say this should be rule number two, right after making sure the game doesn’t crash back to the iPhone/iPod Touch launcher.  Twistum offers a game that is extremely cute and a good idea but ultimately is incredibly frustrating due to rapid difficulty increases that ruin the experience quickly.

The game revolves around you moving 3 baskets on the bottom of the screen.  The baskets all correspond to a certain type of fruit that falls from the tree.  You switch the baskets back and forth and try to line up the falling fruit with the correct pot.  All of that works brilliantly and in fact is quite cute and playable…during the first level. 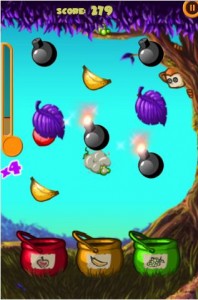 If you didn’t notice, that was foreshadowing.  We will come back to the difficulty increase in a moment.  There is only the core game here.  No achievements, no social gaming network.  It would have been nice to see some integration with OpenFeint so you could see how well you are doing compared to others. The controls are simple drag and drop.  There is also one time during each level where you must “shake the tree” in order for the fruit to begin falling.  The graphics are extremely well done for the type of game it is.  I could imagine a young kid playing this game for hours (if not for the difficulty issues).   The sounds within the game are fitting, but the music gets extremely repetitive after a while.  Luckily you can turn it off in the options.

So let’s get down to it; the main problem.  The difficulty level is simply absurd.  The first level doesn’t prepare you whatsoever for what comes in the second level.  I was able to finally pass the second level after a ton of repetition.  However, I have some fairly fleet fingers (I guess) and I was no match to keep up with the falling fruit in the 3rd level.  I am not saying this as someone who merely tried one time and gave it up.  Instead I literally tried for an hour straight to beat the third level.  I could not do it.  I understand that there is a monkey living in the tree that adds bomb obstacles to the mix.  Sadly the game was too difficult for me to ever see this happen.  The main issue is that to try to beat the 3rd level, you have to replay the first and second level again, another pet peeve of mine.  Let’s leave that gameplay mechanic back in the 1980’s where it belongs.  Once it’s beaten, it’s beaten.

I wish I could give this game better marks but I just can’t.  I’m sure there are people out there that will be able to get their fingers sliding around the screen like crazy that can get to additional levels but certainly not your average gamer or a child (who I think would be a great target market for this game).  Unfortunately the game offers no solution for this issue (an easy, medium, hard setting) and nor does it aptly build your basket moving skills through enough levels to get good enough to pass the latter levels.  Perhaps a difficulty setting will be added in the future but for now I recommend passing on this one.