Let me preface this review with this statement: I have never been into or enjoyed Dungeons and Dragons, Magic the Gathering, or any other fantasy RPG. I did however read just about every Choose Your Own Adventure book when I was younger (my mom was a librarian). 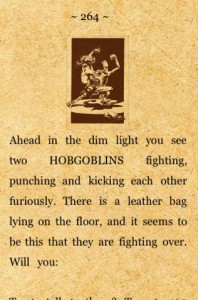 Fighting Fantasy: Deathtrap Dungeon is an iPhone/iPod Touch game that consists of elements from both fantasy RPGs and Choose Your Own Adventure books. The game is just what the title states; a fantasy game where you try to escape a dungeon. The game play consists of reading a ‘page’ and making one of the predetermined choices. To make one of those choices you simply tap a link. Then, after a pretty cool transition of book pages turning, another page to read and another predetermined decision to make.

If you are first time player, which I was, you will need to read the game rules. This took me over 30 minutes. This includes me having to go back and reread some topics just so I could get a solid idea of what I was suppose to be doing. After you read countless pages of rules, you then set up your character’s stamina, skill, and luck by rolling an on screen die. The dice roll is also how you fight adversaries throughout the dungeon. After you set up your character attributes you are ready to play!  But first, you have to read the game’s background story. Don’t worry it doesn’t take as long as it did to read the rules. 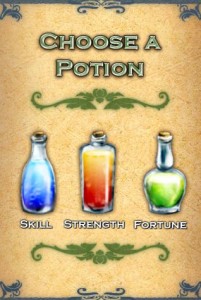 During the rule reading the creators suggest using a piece of paper to draw out the path you take because there is only ONE way out. And by drawing a map, you will help yourself not make the same mistake twice.

The graphics are pretty good considering the only motion in the entire game consists of the screen transition and rolling the dice.   For this type of game the design, colors, and graphical themes are well done.  The game starts out with a cool menacing song, but during game there is no background music, just sound fx of pages turning. Oh yeah – there’s also music when you die. Get use to that music, you will hear it a lot. 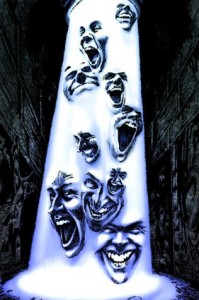 Overall this game isn’t for me. But like I first said, this genre of games in general has never caught my fancy.I should mention that at the $2.99 price point, this game is a tough sell no matter who you are.  Wait for the inevitable price drop before jumping on this one.  This game’s is best for casual gamers that loves RPG elements within their Choose Your Own Adventure books.  For all others, the difficulty, rule reading, and the role playing elements will likely be too slow and tedious.