By Cody Sharp on February 24, 2010@iphonegamerblog

For better or worse, most of Guerrilla Bob is a throwback to the golden years of arcade shooters.   The good includes some nice humor and quick gameplay.  Unfortunately some of the bad stuff from the old days has been thrown in as well; Over-used voice samples and re-used locations and graphics.  You’ll definitely have fun for a while with Guerrilla Bob but its long term replay value is questionable. 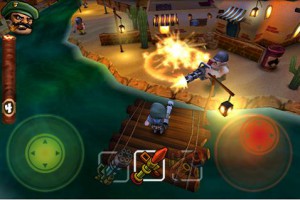 The graphics within the game are the first thing I’ll mention.  Usually I’ll start with gameplay but the graphics overshadow everything else.  They are superb.  Great lighting, nice explosions, really well conceptualized characters and bosses.  The entire game is shown in top down isometric view.  It works pretty well in most cases although there are instances where the only way to kill the bad guys is by shooting at people off of the screen because the camera doesn’t zoom out at all.

The gameplay itself is a mix of old school Ikari Warriors and iPhone/iPod based games like MiniGore and Alive4Ever.  There is a minimal background story that propels you forward but after that you go in guns blazing and killing everyone you see.  As you move Bob through missions you find weapon upgrades, speed boosts, health packs and damage multipliers.  It’s the very definition of an arcade shooter and it works pretty well.  One of the main downsides is that the game only last about an hour or so.  After beating all of the games missions, you do unlock a survival mode which I found to be extremely boring.  Nevertheless, some of you guys out there might get a lot of enjoyment out of it.  Swarm after swarm of baddies come after you and you try to last as long as you can. 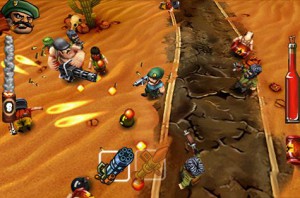 The controls within the game are hard to get used to at first.  It works as a dual control based game.  In the beginning of the game they just feel really loose.  After a while of playing they do feel better and become easier to use.  Just don’t go in expecting to hit all of your targets right away.

The sound within the game is pretty well done although it could have been better in some areas.  There is voice acting done throughout the game.  Bob is your usual tough guy action star spouting out all kinds of one liners that sound badass the first few times you hear them.  After a while they can get a bit old though.  The music within the game is pretty well done and fits the Middle East setting very well.  The gun sounds on the other hand could have been better.  Your machine gun tends to sound really hollow and dinky.

The main issues with the game arise after the second level.  The first level is in the daytime in the Middle East.  The second level is in the nighttime in the Middle East.  Very cool settings.  Then you realize that in every level you are going to see all of the same graphics over and over again throughout the game.  All of the graphic tiles are re-used throughout the game in the following levels as well.  There are a few nice touches later on towards the end of the game that change up the monotony but not enough.  By the end of the game, it would have been nice to see Bob anywhere but the Middle East. 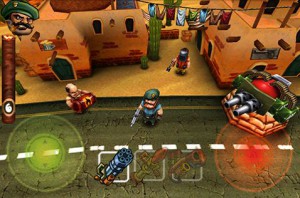 All in all, this is a pretty solid game.  The price at $2.99 seems a bit high for about an hour or so of gameplay considering some of the other options out there.  That being said, the graphics are extremely impressive (at least for the first few levels) and the gameplay is a lot of fun (once you get used to the controls).  If you can get over those caveats then by all means, go ahead and buy Guerrilla Bob.  If nothing else, it will give you a nice, warm retro game feeling, and who doesn’t want that?