Rocket Downhill Penguin is an iPhone/iPod Touch racing game where you must avoid obstacles and pick up objects to increase your score. You play as Rocket, a penguin, and upon starting the game immediately start skiing down a mountain. Snowmen and trees are your main obstacles on the course.  Hitting snowmen, while lowering your health, also has the peculiar effect of uncovering medals which can lead to extra health and even invincibility. But don’t hit too many snowmen, they still hurt when you hit them and will eventually end the game.  Trees on the other hand carry no benefit at all and only serve to slow you down. 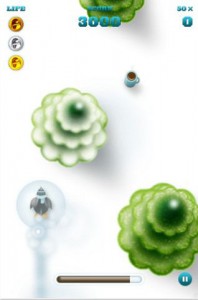 Tilting the iDevice is the only in game control, left for left, right to move right. I found it hard to stop Rocket from moving left or right and just ski straight. Once you start bobbing and weaving beware that it can get pretty squirrelly. The graphics are very clean, nothing fancy, but nevertheless they look good for this type of game. I especially like the brightly colored/snow filled trees.

There is an obvious winter theme in this penguin racing game. The in game music does a very good job of capturing a winter feeling without being a Christmas song. When Rocket crashes into a tree or snowman you get a neat sound effect that actually sounds like a large snowball being smashed. When Rocket picks up some hot cocoa or a medal, you will hear an exclamation sound and see your score go up. The audio stays pretty simple throughout the game, but anything else might have been too much anyway. 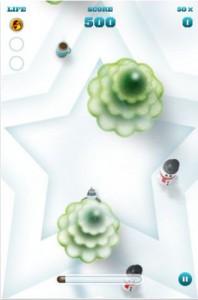 This is a fun little game but personally, I don’t see it having much replay value. I played it for about 20 minutes the first time and about 35 minutes the second time and I never got invincibility and never scored over 2500 points. However, I was visiting my parents this weekend so I had my mom play and she loved it. She screamed and laughed and played for quite a while. Now keep in mind this is a woman who tried to make Mario, in the original Super Mario Brothers, jump by holding the controller over her head. She’s not a videogame player (Editor’s note: get her on the Wii). 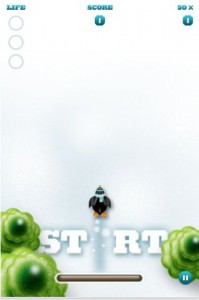 If you want a game that your young kids (or your mom) might enjoy, you should pick this game up. Its simple low frills gameplay, can be picked up, played, and enjoyed by anybody, and that should be counted as a success for any developer.