By Cody Sharp on March 1, 2010@iphonegamerblog

Sometimes games come from nowhere and surprise the heck out of you.  I recently had that happen to me and I got to tell you, it was exciting.  The game is Shinobi Ninja Attacks.  It has nothing at all to do with ninjas (well not directly).  Instead it’s actually based band on a band of the same name from Brooklyn.  You play as one of 4 band members and utilize your instrument of choice to whoop the bad guys.  There have been a few music fighting games like this made in the past.  Do you remember the Aerosmith game where you threw cd’s at your enemies?  The end result is a standard faire fighting game with one standout feature; the music.  Fortunately the music alone makes this game worth playing. 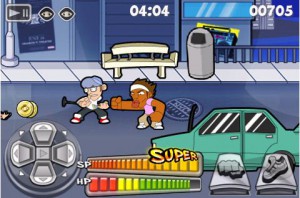 Going in I had never heard of Shinobi Ninja.  I went to their MySpace page and listened to a few of their songs.  At first it reminded me of Beastie Boys but I think that was mostly due to them being from Brooklyn.  As I listened to them more, I began to see that they really stand on their own as a band.  The game is directly based on the musicians in the band.  One character fights with a drum stick, another with a guitar, etc.  Your mission is to get to a concert and there are a lot of people trying to hold you back from that goal.  That resistance leaves your band with no choice left.  You have to fight your way through the crowd of baddies.

The graphics are well done.  Most of the characters are drawn in comic book fashion.  The hand drawn characters are all rather nice looking and many things within the game are able to be destroyed including phone booths and benches.  Destroying these items actually uncovers powerups that can help you on your quest to get to your concert on time.  The sound and music is really where this game shines.  Inside of the game, you have the ability to hear 6 full tracks from Shinobi Ninja’s (the bands) cd.  After beating the game you also unlock a code that gets you the six songs that are downloadable in five mp3 files that can be played anytime outside of the game.  You also unlock 2 music videos that can be played within the game. 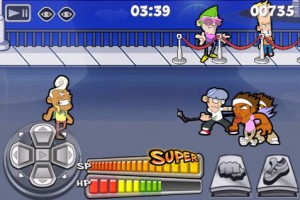 The controls themselves involve you fighting your way through crowds of people using a series of 2 buttons and a special powerup button that activates after beating up enough bad guys.  The end result is a pretty decent rendition of Double Dragon/Teenage Mutant Ninja Turtles type gameplay.  It’s nothing special, but it’s definitely entertaining. 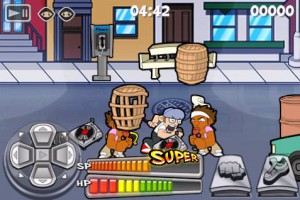 The main issue I have with the game lies in its length.  The game is divided into four levels, each of which can be completed in 5-10 minutes each.  I beat the game in one sitting which took about 30 minutes.  At 2 bucks, this game clearly wouldn’t be worth it if you were only playing it for the game.  The real replay value is not with the game but with the free tracks that you can download after beating the game.  “Rock Hood” is especially a great track.  All in all, this game is a must buy for any Shinobi Ninja fans.  Even if you not a fan right now, take a few moments to listen to some of their tracks and see what you think.  For me, the music alone is worth the price of admission.  The game is just a bonus.