Get it now on

Lavaball is an iPhone/iPod Touch motion based game.  The point to this game is to move a molten ball of liquid hot magma and set the villagers and their homes on fire, or stay away from them and just try to dodge them.  This game really reminds me of Marble Madness.  Not so much in the maze aspect, but you are essentially a ball that rolls around until the objective is completed. This game is fun if you have 5 or 10 minutes you need to waste, but after that, there isn’t much that makes me want to keep playing it. 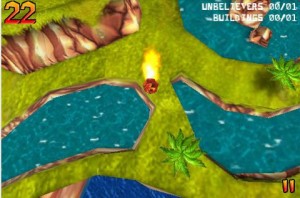 The graphics and gameplay are both very simple.  In order to move around you simply tilt your iDevice in the direction you want to go.  There are no buttons or anything like that which is really good for a game like this.  If you had buttons and what not it wouldn’t do this game justice.  The graphics are subpar, which is okay.  This is a kid’s game.  Its target market certainly does not seem to be older people.   The game is also not very difficult.  Its difficulty increases by throwing some moving targets into the mix. 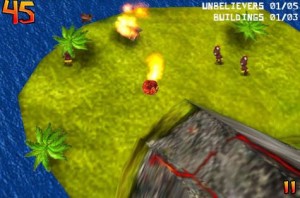 My overall experience with this game was pretty blah.  It really didn’t not keep my attention.  As you go along, the levels get progressively harder, as they should in any game.  The whole premise though was just not good to me.  If I was younger then I’m sure I would like this game a lot more.  Watching the people run away after you set them on fire gave me a little chuckle at first, but that was about it.  This game was free, but even so it isn’t worth too much of your time when there are so many better games out there for just a buck. If you are a kid or a parent looking for a game for your kids (and don’t mind people being set on fire in a humorous way), then this might be worth downloading.