This is not your mom’s Alice in Wonderland. This is a game based on a very old story that has been through the mind of Tim Burton. I’m sure you are familiar with Tim Burton, the director of Batman, Edward Scissorhands, and Beetlejuice, just to name a few. If you know anything about Tim Burton then you know he is a very innovative director that tends to see things in a much bigger, sometimes much scarier way. Alice in Wonderland is no different. The game has a creepy, yet playful vibe that keeps you locked into the game play. 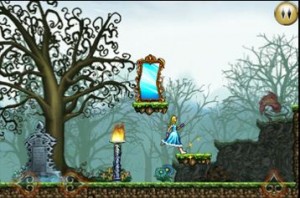 Alice in Wonderland is a 2D role playing puzzler. You play the role as a teenage Alice back in Wonderland. The problem is that Alice doesn’t remember much about Wonderland and Wonderland doesn’t really remember her. Since Alice has been gone, the Red Queen has risen to power and is ruling with an iron hand.

I have been playing AiW for three days now, about 2 hours a day (on and off) and I am still on the first section. So don’t think this game will be a quick and dirty play. It has hours of continuous gameplay. You control Alice by touching on screen arrows. This is also the way to make Alice jump. A quick note: when you do make Alice jump she does not jump straight up, she jumps whichever way she is facing. As you meet new characters; including the White Rabbit, Cheshire Cat, the March Hare, and the Mad Hatter, Alice will get access to their special powers. These powers consist of moving objects, making objects disappear and reappear, freezing objects, and moving object to and from the mirror world. Each of these powers will be needed to pass certain levels. You will use these powers continuously throughout each level. You might have to freeze a block and then move it so you can jump over a waterfall. Only certain objects can be used by each power. You will be able to tell because those object with be covered by colored ivy that will match a power. 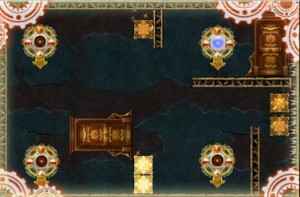 The graphics are nothing short of what you would expect from Disney, crystal clear and vibrantly colored. The audio is also right on par with a Disney project. The creators did a great job using music that fits the feel of a creepy but fun video game. The sound FX are well done for the most part. You will hear (and probably get tired of) a magical sound effect every time you use another character’s power. This gets a little overbearing since you use the powers all of the time. 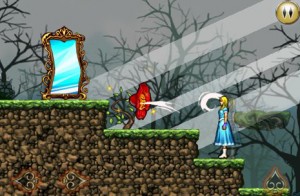 Alice in Wonderland is a fun game full of twists and turns. The gameplay is challenging but straight forward. I don’t think this would be a game for young kids, not because of the creepiness, but because the puzzles do take some trouble shooting. As a bonus there are a bunch of included riddles and geo-location options that unlock objects you would find in Wonderland.  This is a solid RPG and I recommend checking this game out. At $4.99 it is a bit pricey, but with its hours of enjoyable gameplay it is worth it.