Ragdoll Blaster 2 is the iPhone/iPod Touch follow up to iPhone Gamer Blog’s 2009 Game of the Year, Ragdoll Blaster.  Suffice to say, there was a tremendous amount of interest in the sequel on our team.  Every screenshot, every blip of news that came out, we were all over it.  When the game officially came out on March 1st, it was like Christmas morning.  While we were excited to open our gift, we were scared that the present wouldn’t live up to our expectations.  That is why it is with relief and excitement that I can tell you, Ragdoll Blaster 2 is a much better than the first game.  It is quite simply, wonderful. 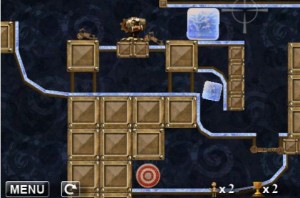 Ragdoll Blaster 2 is a puzzle game that depends on physics.  You use cannon to shoot at targets.  You shoot those targets with dummies.  Ragdoll Blaster 2 offers so many additional methods for getting to your target that it’s hard to remember them all.  Just a few off the top of my head; portals, multi-cannon puzzles and black holes have all been added to create puzzles.  Some of the newest puzzles are so wildly inventive that it’s an experience just to play them (even if you fail the first 10 or 20 times).  I don’t want to ruin any of the surprises but so many of them are completely different from each other that you will not want to stop playing until you have seen them all. 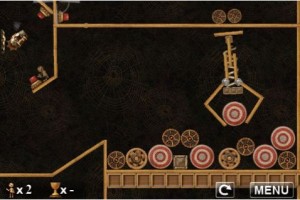 The graphics and sound have also been upgraded in Ragdoll Blaster 2.  The music fits well and you probably won’t mind its repetition at all.  The sound throughout the game is also very well done.  If you’re someone who gets tired of sound or music quickly, there are options to turn them both off.  The graphics within the game have been upgraded tremendously from the first game.  Everything looks textured, including your ragdolls.  The gameplay really doesn’t require it, but this is really a good looking game. 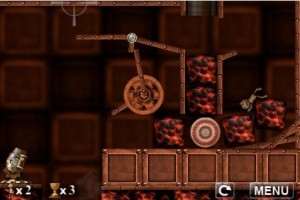 The Plus+ network has been put to good effect here as well.  If you’re not familiar, plus+ is a network where you can compare your in game scores with others across the world.  You can also unlock achievements as you move through each of the 150+ levels in the game.  Other puzzle games, even good ones, can get tiring because the puzzles are the only things that change between levels.  Not here.  Ragdoll Blaster 2 truly is innovative is almost every puzzle you load up.  15 or 20 times within the game you get to be a part of level that is truly genius.  Those ones make you wonder what type of people come up with this stuff.  At $2.99, you can’t lose.  Buy it now.