The Street Fighter series has made its first appearance on the App Store with Street Fighter 4 being released earlier this week.  It brings to the table all of the things you likely loved and/or hated about the series in the first place.  The old characters are all here including Ken, Ryu, Guile and Blanka.  The special combo moves are back as well including the phrases that go along with them.  That’s right; Ken’s “Ha-dou-ken!” and Guile’s “Sonic Boom” can be heard once again.  But for whatever reason, the magic behind the series just isn’t quite there for me. 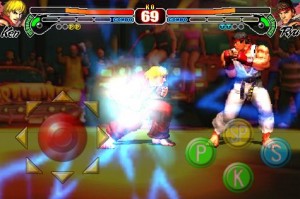 Upon starting the game you have two different modes to choose from.  The first being Solo play while the other is Versus mode.  In Versus mode you have the ability to play head to head with another person using Bluetooth.  Solo mode is divided into several different categories.  In tournament play, you pick a character and fight your way through the A-list Street Fighter characters.  In dojo, you learn how to fight and use some of the special moves within the game.  The other 2 modes, free sparring and the training room, give you areas to practice your new found skills.

The tournament mode is the one I will focus on here because it is really the one the Street Fighter series in known for.  I started off playing with Ryu, who is a total badass.  I knew a few of the special combo moves and began fighting my way through the ladder of competitors.  Most of the controls within the fight are pretty well done considering you are playing on an iDevice.  However, when it comes to blocking a kick or a punch, or especially the dreaded special combo move, the controls can feel a bit sticky.  This game was really made for an arcade style controller and you can tell, but I think Capcom has mapped out the buttons as cleanly as possible. 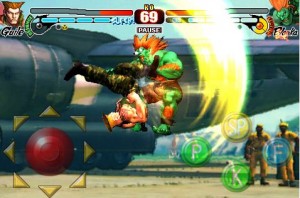 The graphics within the game are nicely done.  They have certainly been upgraded since the last time I played a lot of Street Fighter during the SNES era.  However, I had hoped there may be some 3D thrown into the game but this is strictly a 2D game.  When you or the computer does a special combo move a cutscene is used and the camera zooms in very close on the character doing the combo.  Overall, this is a nice effect but it makes it hard for you to prepare to block for the move since you aren’t sure when the cutscene will disappear and you will be given back control of your character.

The sound within the game is really a mixed bag.  The music is fantastic; a nice techno beat that is played while in the menus.  I only wish it was carried over into the gameplay.  Instead we are left with awful one-liners from the characters after a win or a loss.  Playing as Ryu I must have heard 50 times (after literally every single round-not a whole battle, every round), “I still don’t have what it takes, I must train harder”.  What the hell?  Is this a Sega Genesis?  Do you only have a 4 Megabyte cartridge to work with?  You can play games on an iPhone/iPod touch that have all of the quality of a PSP game yet this game gives you the exact same line every single battle over and over again?  Yuck. 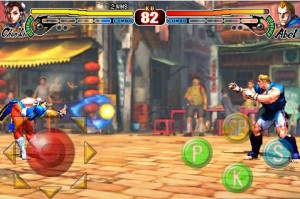 Overall, the game was a bit of a disappointment.  I guess I went in hoping that Street Fighter IV would not only let me relive the nostalgia of my youth (which it does), but also improve its gameplay since then in every other way.  It didn’t really do that.  This is a decent fighting game but some of the timing feels off and the controls feel a little stiff.  Still, when it comes to the iPhone or iPod Touch, you would be hard pressed to find a better straight up fighting game.  And it does have nostalgia going for it.  But for me, it’s not enough.  At its current $10 price tag. I would pass.