Doodle Run is a 2D game where you try to survive as long as possible. You don’t actually control the “Dude” (the game’s character).  Instead you manipulate the game’s environment. By that I mean that the background is movable. As the Dude walks forward you control the “paper” backgrounds by sliding them up and down. To make the Dude jump you slide the background up and quickly pull it down. You will have to make the Dude jump to avoid the game’s obstacles including comets, zombies, and worms. There are also items you will find on your endless journey that you can jump on that will fly you forward quickly including a bullet and cloud. 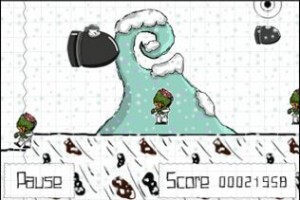 Other than the obstacles, the difficulty in this game is increased due to the Dude’s walking marathon from one piece of paper to another, so you have to keep the piece of paper on the right under the Dude or he will fall off, ending the game. If the Dude does run into an obstacle he will lose his head. If you quickly reattach his head before another obstacle touches the Dude then he will get back up and keep walking.  To be honest, this game is fairly difficult.  While there is nothing wrong with having a game that is as difficult as this one, that difficulty also keeps it from being as wonderfully simple and re-playable as Doodle Jump.

The graphics aren’t great, even for doodles. I’m starting to think some doodle games are just using the word doodle as an excuse for bad graphics (Editor: I also think many dev’s use it because of the massive success of Doodle Jump). The music on the other hand is quite good. It is catchy and doesn’t take away from the game. The sound FX are decent for what they are but mainly consist of zombie moans and bazooka fire. 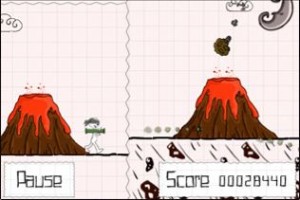 In my opinion, Doodle Run is a swing and miss. Despite the ability to compare your scores to other Doodle Runners across the world, there isn’t much of extended gameplay. And while the gameplay mechanic is unique in that you use the environment to control your character, the manipulation of that environment is pretty tough to get acclimated to.  Unlike Doodle Jump where even the worst player can get 5,000 points and feel some accomplishment, Doodle Run seems to have no difficulty ramp-up at all.  As soon as you start the level, you are in for a world of hurt.  For this genre of game I think that is bound to turn a lot of players off.  If the difficulty was decreased, at least initially, and the developer added a few additional obstacles, I think this game would better meet its target demographic; the casual gamer.    As it is now, only hardcore players will really get much replay value out of Doodle Run.