As you might expect, in The Hero, you play a superhero.  Indeed, you have the ability to fly, an amazing physique and special powers that help you save one town at a time.  Loading up the game, the art and graphics instantly look like this one is going to be a ton of fun to play.  And it is, if you take it for what it is and not wish for what it is not.  This game has no real story and its missions are set at a blistering pace.  If you go in expecting to have a backstory, a strong nemesis, and realization of what it means to be a hero, you will be disappointed.  However, if you can go in and accept the game as a lightning fast action game with a hero shell, you’ll likely have a lot of fun. 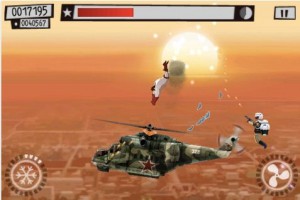 The game begins in anytown USA.  As a hero, you need to ward off the bad guys, save the town from enormous insects, kill zombies and ninjas, among other enemies.  To do this, you fly around using your control pad and ram these creatures into oblivion.  Traveling at the speed of sound, you zoom around the map looking for flashing arrows showing you where the next danger is located.  The game is set on a 2d background with buildings that contain some of the citizens of the town (who all know who you are and are huge fans).  These fans help you keep your fame up which is what gives you your power.  Superman has the sun; you have a crowd’s admiration.  If you run out of fame, game over.  To keep your fame up, you need to destroy the bad guys, save falling babies, put out fires or give a hero worthy high five to your adoring fans who hang out of the building’s windows.

The graphics within the game are very well done.  Your hero looks like something straight out of Pixar’s The Incredibles.  Flying around the map certainly does give you a feeling of speed and power.  The animations are all well done for each type of enemy and overall, everything is extremely clean.  The sounds within the game, particularly the music, are also first class.  When it comes to presentation, this game is the tops. 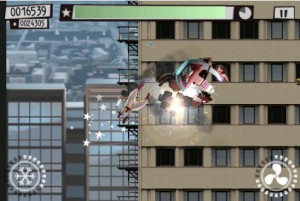 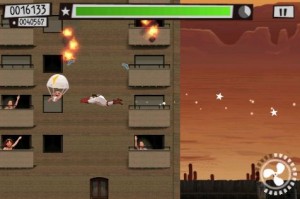 Certainly this game gives you a lot of replay value.  15 different campaign levels, each of which have their own creatures to fight, a survival mode that is unlocked after completing a certain amount of the campaign, and 20 achievements that can be unlocked as well.  The only problem you may have with this game is that you want it to be much more than it is.  Someday I would love to see a superhero game on the App Store that allows you to go through a single storyline and save the day.  This isn’t it, but it is worth playing.