Rabid Gophers is an iPhone/iPod Touch game that consists of three mini-games, Gopher Blast, Gopher Bombs, and Gopher Sniper. Each mode has three rounds, each more difficult than the previous. There are two types of gameplay, Campaign and Survival. Playing the campaign, you will go through each level, three rounds each, with a cool little cinematic after each level. The Survival gameplay is exactly what it sounds like; you play one of the three levels as long as you can without losing. 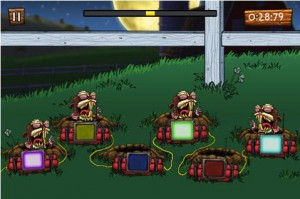 As mentioned, there are three different mini-games within Rapid Gophers.  They are each quite a bit different.  Gopher Blast is very much like the classic fairground game, Whack-A-Mole. However instead of using a mallet to take care of the gophers, you use a shotgun. There is a bit of gore in Rabid Gophers, its cartoon gore but just a heads up if you have small children playing your games.

Gopher Bombs is a sequence based mini-game where you must activate bombs in the same sequence as the gophers popping out of their holes. In my opinion this was the toughest mini-game of the three. You start out remembering the position of only three gophers, but by the end of the third round you have to remember six gophers at a time. 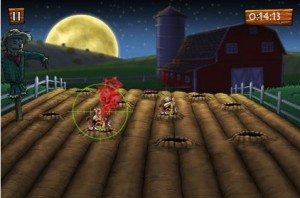 Gopher Sniper also has you using a gun, but this time a sniper rifle. In this mini-game you play as a farmer that is trying to rid his farm of these horrible gophers.  Unfortunately it seems your house has been infiltrated by the ubiquitous creatures and the only solution is to take them out.  As the gophers pop up you shoot them in the head. Again, a little bit of gopher blood and guts but nothing too bad.

The graphics and audio are both really well done. The cinematic cutscenes that help explain that game are simply fantastic and the gophers really do look rabid and have great color shading. The music that is used helps give the game an eerie horror film feel. 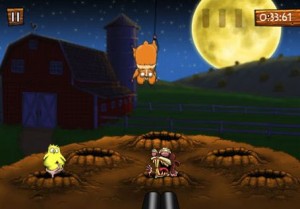 In summary, I really liked this game. My only complaint is that the Campaign is really only nine total rounds. It could have used another Campaign level. That being said, you do get a Survival Mode to increase the game’s value.  For $1.99, this game is worth playing.