Teenage Mutant Ninja Turtles, Transformers, and David the Gnome pretty much sums up the cartoons I grew up on. And yes, I did (do) have Transformers bed sheets. So when I got a chance to review the new Transformers game for the iPhone and iPod Touch I jumped all over it. When I first downloaded the game I didn’t know what to expect.   I hadn’t really read anything about it or even seen any screenshots. 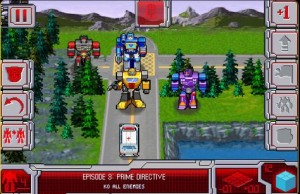 I think in my head I had very high hopes and after opening the game I was a bit let down. The opening cinematic was an old style cartoon (think a mix of He-Man and the original Transformers) which caught me off guard. I was expecting a little more production value, but in retrospect I now feel that the visuals in the game are meant to be a little old school. The short movie explains that the Autobots have been “asleep” for 4 million years and the Decepticons have crashed their ship and enslaved all of the Autobots on Cybertron, the home planet of the Transformers.

After the short cartoon you are quickly thrown into the game. Transformers: G1 Awakening is a turn based strategy game. The first few levels are tutorial levels. They explain how you can move, fight, transform and they give you information on how to repair, upgrade, and activate more Autobots.

During each turn you are allowed to do any two actions: move, fight, transform, drive, or upgrade. Now of course some of these actions cannot be done in the same turn with the same character. For example, you cannot transform into a car and fight, because you cannot fight if you are in vehicle form.  In a strange twist, if you start your turn by upgrading an Autobot, you are not allowed to do any other action within the same turn.  However, you can move an Autobot and then upgrade, so strategy and thinking ahead is a must to be successful. 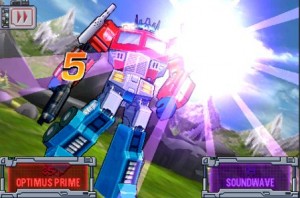 The gameplay is both fun and addicting. The earlier levels aren’t very challenging but still require some planning and thinking ahead. Whenever you select a Transformer, Decepticon or Autobot, the bottom of the screen will show the stats of that specific Transformer. The characters name, the power left (out of 100), the attack power, defense power, and speed are all shown. These stats are vital when sizing up the Decepticons and figuring out which one to attack. For example, you don’t want to send an Autobot with a 25-35 attack strength to fight a Decepticon with a 60-70 attack strength and a 100 defense.

Another strategic element in this game is resource management. You must have one of your Transformers flag power lines and power plants in order to gain Energon  Energon is necessary to upgrade, repair, and activate other characters. If the Decepticons gain control over those power lines and power plants, they will have more Energon and be able to build up an arsenal faster and stronger than your own.

Other than the story mode, there are two other types of game modes included; Showdown and Cybertron Arena. Showdown is a head-to-head battle where you must be the last to survive. These are fun, quick missions that do take strategy to win. The Cybertron Arena is similar to a battle royal. There are four Transformers on each team and nowhere to run. You can either play the computer or a friend (although not through a network, only by passing the device back and forth). 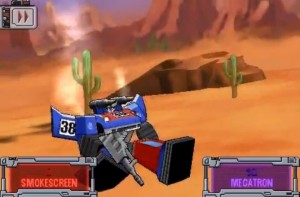 The graphics were a bit lower quality than I first expected.  However, after really sinking my teeth into the game I feel that they give the game a very cool nostalgic feel. The in-game graphics instantly reminded me of SimCity. There is a very similar feel about the in-game user maneuverability. I liked it. I thought it had a familiarity about it and I felt comfortable from the get go. The fight scenes are mini cinematics that show the Transformers shooting at each other. These mini movies have good graphics but get old since you see them every time you fight (you can turn them off in the options). However, like SimCity, the graphics are a little pixilated when you are zoomed in, but you quickly get over it and focus on gameplay. The audio is great. There is a cool background song that loops during gameplay but the music does change during fight scenes. The Sound FXs are what you would expect from a Transformers game. Lots of cool warping machine noises and laser sounds. 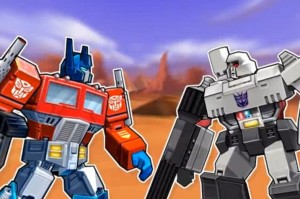 I have being play this game for the last three days. I am only level 15 in the storyline and to be honest, it is giving me some trouble. But if it were easy, it wouldn’t be as fun. So I have already had many hours of gameplay and I have only played the other two game types enough to write a little bit about them. This is a great game that is definitely worth the money. In fact, I have been carrying around my charger because I have been playing so much.  Whether you’re a fan of the original Transformers or just a fan of turn based strategy, this game is sure to please.