In case you missed it last year, Peggle is a one of a kind iPhone and iPod Touch gaming experience.  I have been holding off on the review because I have been trying to think of a way to best describe it.  Basically you shoot a ball out of a cannon towards a series of pegs that as are grouped in a variety of manners.  There are several different colors that the pegs can be.  The most important color being orange.  Your mission; you have 10 balls to shoot and try to eliminate all orange pegs.  It might sound kind of droll, but I am not doing it justice.  It is a heck of a lot of fun. 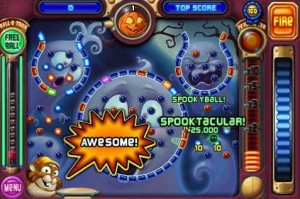 The reasons for a game like this being fun must be unique and different.  After all, my poorly worded description doesn’t really sound like it would be a barrel full of monkeys, but it is.  The developer is PopCap Games, that’s right; THE PopCap Games, the developers of Plants vs. Zombies (read review here).  They mix in the same type of humor you see in that game and bring it in an entirely different way.  Other than the humor, you’ll also see great graphics and a fantastic use of sound throughout the game.  None of those things are the key to this game’s success though.  The game is very successful because the pegs that aren’t colored orange all have special attributes and using those magic pegs in a variety of different ways in a real treat.

The green pegs are really where a lot of the magic happens.  Each stage you go through, the green pegs will have a variety of different abilities.  Sometimes the green pegs will allow for multiple balls to be produced.  Other times it gives you more chances to get additional balls (more than the standard 10) to play with.  The purple pegs also give you additional score bonuses.  Really this game is like a modern day, or maybe an entirely different way, to play a pinball machine.  Actually, that’s the best way I can describe it.  If you like pinball games, you are definitely going to love Peggle. 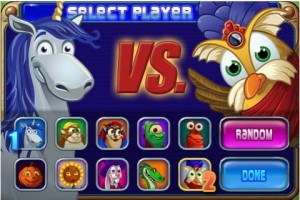 The game is surrounded with incredibly cute animals that take you through how to play each type of level.  And you really have a tremendous amount of replay value within the game.  Each level has several stages.  And each level allows you to win in a variety of different ways and strategies.  When you shoot the ball out of the cannon, the physics engine takes over.  The ball you shoot can bounce like crazy and depending upon which angle you use to shoot it, you will have a drastically different result.  Even if you run out of balls and don’t hit all of the orange pegs (thus losing), replaying the stage is a lot of fun.  That is a characteristic of only great games. 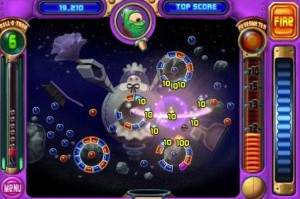 Peggle also has the ability to show a replay of your last shot.  It also zooms the camera into the action when the last orange peg is about to go down and really gives you a great sense of satisfaction upon finally beating a stage.  This game is challenging, but playable for any skill level.  All in all, don’t miss this one.  At $2.99, Pop Cap games has again given the App Store a real steal of a deal.