Karnak Attack is an iPhone and iPod Touch 3D first person shooter set in an Egyptian-themed world. The object of the game is to collect as much gold as possible and find the Pharaoh’s gold head (which usually is close to the portal to the next level). Your weapons of choice are a machine gun, a shotgun, and a super weapon. The shotgun can kill with one shot but you have to be very close. The super weapon kills most enemies with one shot; however it will take three or four shots to kill each level’s boss. The super weapon is unique in that it is the only weapon in your arsenal that can take down the boss at the end of each level.  Other enemies consist of mummies and Anubis (jackal headed Egyptian gods). 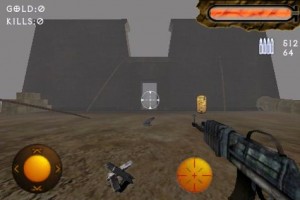 The first thing you’ll notice upon loading up the game is that it takes a while to load and even on my 3GS, the frame rate is a bit jumpy during gameplay.  That being said, the in-game graphics are decent but they do tend to look a bit pixilated at times.  As far as the framerate choppiness, it is a little worrisome, especially since a slower iDevice will likely have even more trouble playing Karnac Attack at a decent framerate.

Unfortunately the audio is also lacking any real distinction compared to other iPhone and iPod Touch games. It consists basically of mummy moans and footstep sound effects that sound like offbeat tap dancing. There are also a few sound effects for when you pick up gold, a new weapon, or shoot your gun.  Overall, these are nothing to write home about and add nothing of note to the Egyptian setting. 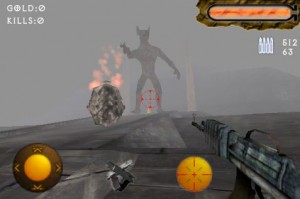 As someone who rarely plays FPS games on my iPhone, the controls are also a bit difficult to get use to. You will need one finger to move forward, back, left, and right, and one to shoot and look around. I felt as if my thumbs were always in the way of the screen making it hard to see where I was going. The mummies will come out of the ground and walk towards you. You must aim and shoot with the same finger. It’s not easy.  That all being said, if you’re a huge fan of playing FPS’s on your own iDevice, you may feel much more comfortable with these. 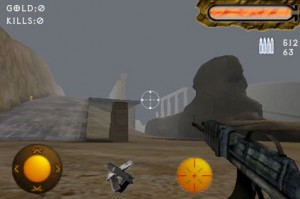 I think passing on this game wouldn’t be a bad decision unless you really love first person shooters or Egyptian-themed games. Although it is only .99 cents, my main issues lie with the fact that I played Karnak probably about 20 times and during that period it froze twice while I was shooting at a level boss. This was really frustrating, especially since every time you start the game you have to start all the way back on the first level at the very beginning. Argh!  If the developer is able to fix the bugs, the choppiness and includes an autosave feature going forward, this game may be worth a second look.  For now, you’re better off spending your money elsewhere.