Burblefish is a tilt based iPhone/iPod Touch game in the vein of Doodle Jump.  However, instead of jumping, you continuously fall towards a specific destination.  This game is clearly meant for those who are beginning their voyage into the vast realm of the gaming world.  Meaning, its gameplay is fairly simplistic.  You play a fish that is falling towards your home, the water.  On your way to the water you need to relieve your “gassiness” by burping.  If you become too gassy, you explode.  Despite its ridiculous premise and simplistic nature, this game does well at what it tries to do. 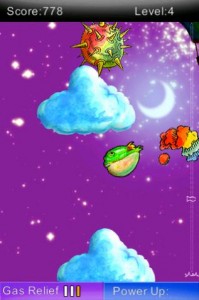 You move your falling fish by tilting your iDevice from side to side.   In order to relieve your gas you must run into multiple hot air balloons throughout the level.  If you hit the spiky balls, the gas inside you grows.  If you have too much gas you pop and die.  There are many levels and as you move on further through the game they become a bit more difficult.  In harder levels the spiky balls grow in size and start to move around the screen more, making it tougher to relieve your gas. 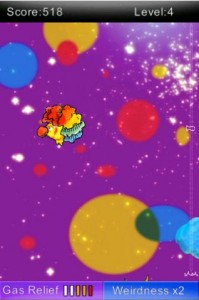 There are two helpful objects in each level.  One is a football helmet.  When you see the helmet, grab it.  While wearing it you can hit the spiky balls that are close to the balloons, yet still be able to lose your gas.  The second object you can find during your fall is a multicolored clown wig and nose.  If you grab this, it will put the clown wig on your head and make the background psychedelic.  You are not able to hit spikes while this wig is on though…I found that out the hard way! 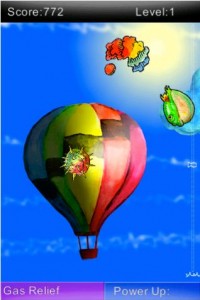 All and all this game was exactly what it was meant to be.  A beginner’s game.   The graphics are decent and the music was well put together as well.  If you are looking to start your voyage into the iPhone/iPod Touch gaming world, this would be a good starting point.  It also goes without saying that a child might like this game as well.  The ease of play along with the gassiness should play well with the SpongeBob demographic.  Just a word of warning, if you are a more advanced gamer, this game might be a bit too easy.