Dungeon Run is an iPhone/iPod Touch 3D maze game where you lead a leprechaun through each level using one of two control schemes available. You must dodge bear traps and other obstacles along the way. The bear traps and fire pits don’t move along with your movements, but the other objects, like rocks, ghosts, and monsters do. There are 25 levels and they are segmented into 3 types; escape, checkpoint run, and gold rush. 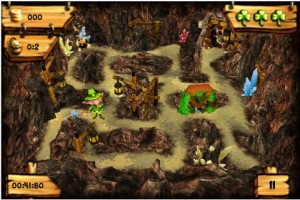 The escape levels are straight forward. You must get to the exit as fast as possible. There will be three pots of gold but you are not required to get any. Move fast, avoid obstacles, and head for the door to beat the stage.

During the checkpoint run levels you must collect pots of gold in the order they appear. Once you have the third pot you the door will open and you can escape. Keep in mind that you will have to dodge the same kind of obstacles in this type of level.

The gold rush levels are where you must grab all three pots of gold in any order. When you get the third pot you dungeon door will open and you can get out. In my opinion, these are the most difficult type of level. They are usually laid out in such a way that you must plan ahead and try to trap an obstacle so you can maneuver to the door. 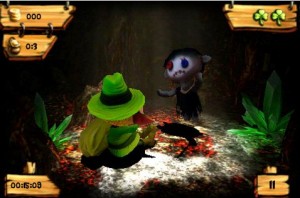 The graphics are good, but not as good as I thought they would be. The menus look fantastic and are extremely professional so when I loaded up the game for the first time, I hoped it would follow suit. Don’t get me wrong, the game still has solid graphics. I was just hoping for a bit more.

The audio is fun throughout. The background music during the menus is a cool little Irish jig. During the gameplay the music is a catchy song that you would expect to hear when watching a cartoon leprechaun escape a dungeon.

I first played Dungeon Run using the tilt control option. It takes some getting used to, and even when you get the hang of it, some levels seem too difficult to use tilt. I later switched to the touch option and found it much easier. The early levels are pretty easy. However, I got stuck on some later levels that really frustrated me. 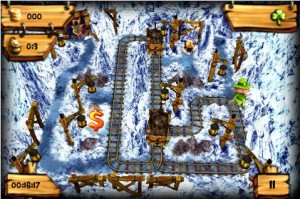 This game is fun. While it hasn’t taken me too long to beat 18 of the 25 levels, it is fun enough that I am still working on the others.  Is it worth the $1.99? I don’t know. If you need a game that will give you a ton of replay value, you might want to look elsewhere but keep this in mind.  This game was created by PressOK Entertainment (the folks that made Finger Physics).  PressOK has quite simply added on more free content to Finger Physics than any other developer has added to their game after release. I’ll give them the benefit of the doubt here and guess that they will do the same for Dungeon Run