Harry Potter Spells is an iPhone/iPod Touch game that brings the much loved series to life in one specific way, its spells.  The main goal of this Harry Potter game is to go through seven years of schooling to learn all the different spells that you can cast while using your wizardry.  The single player mode has you work towards getting through all of the classes and getting the spell right at least three times before moving on to the next spell.  These spells go from very easy to semi-hard to learn.  While the single player game is fun, the real magic of this one lies in multiplayer dueling with a friend. Much like you’d click here to know the various combinations in a horadric cube in the game Diablo 2, the same way the spells in this game can be combined. 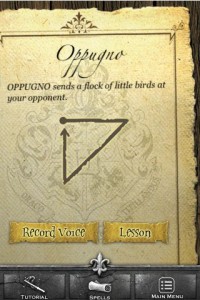 You learn spells by taking classes. These spells can be as easy as drawing a straight line across the screen or as complicated as quickly making the shape of a bow tie with your wand.  The way you are able to cast these spells is by using your finger and moving it across the screen.  I like this control mechanism.  At first I thought I needed to move the phone itself to cast a spell, likely making me look silly waving my phone around.  Fortunately that is not the case.  If you’re a Harry Potter enthusiast, you may have enjoyed widely proclaiming your love by waving your arms in a public place while playing Spells.  Personally, I enjoy the ability to secretly play the game using just my fingertip.

The best part about this game is that you can duel with a friend if you so desire.   While dueling, you utilize the knowledge that you learned in your seven years of schooling.  The duels are set up similar to a Street Fighter game where you have a power bar and the goal is to clear it, thus defeating your opponent.  During the duel the game gives you a spell to cast against your opponent.  However, you do not have to use said spell, you can use whatever spell you want.  So if you use a spell from earlier in your education the spell will be less effective while the spells you learned later in school will take away more energy from your opponent.  The fun is in the strategy of knowing which spells to use at what time.  This mode of the game really shines.

The graphics in this game are among the best I’ve come across on the iPhone/iPod Touch.   Warner Brothers really knew what they were doing here.  The game itself is pretty quick.  I was able to get through the whole thing pretty fast.  But if you are able to get a friend to pick up a copy as well, the long term replay ability comes in the multiplayer dueling mode.  I say all of this having never really been into the Harry Potter series.  This game is fun and well worth the price of admission.  Whether you’re a huge Potter fan or someone looking for a great casual gaming experience, this title is sure to please.