Buy it now on

Crap of Defense is a shooter based war game where you control a tank and try to eliminate the enemy by firing your tank into the marching soldiers. There are three difficulties; rookie, soldier, and badass. Each of those difficulties has 24 levels. At the beginning of each level there is an “Operation” menu that explains the upcoming level and tells you how many enemies you need to kill and how many you can miss. 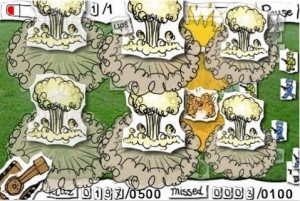 After completing each level, you unlock the next one. You will get tank upgrades as you go on as well. This is a good thing because your load time between shots will decrease with every tank upgrade. Some levels will also give you the chance at some extra help. Some soldiers, when killed, drop helpful supplies. One will, make your tank reload faster. One will explode when tapped and one will even let you shoot as fast as you can tap with no reload time.

Along with the scenario mode there is a survival mode. The troops will keep coming and coming until 100 soldiers get passed you. The survival mode comes in the same difficulties as the campaign. 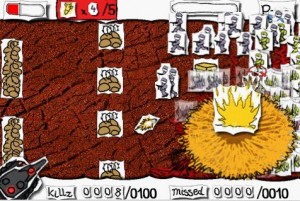 The graphics are of the doodle natural but a little different. It looks like each object is on its own tiny piece of paper. I don’t think I have ever seen this before, but it’s pretty cool.
The audio is basically explosions and background music, and the music gets old and obnoxious very quick (no option to turn it off…you just have to turn down the volume).

They just released an update called the Winter Assault (just in time for summer). The update includes new graphics for the background, soldiers, and tanks. Also, you can shoot bombs that will freeze the oncoming troops. The biggest change is that you have a limited amount of shots, so you have to plan ahead and use them wisely.

Overall, this is a fun game with TONS of levels and gameplay. However, the gameplay does get redundant after a while, but this new update will hopefully help out in that department. After I played for a while I found almost every level can be beaten by aiming the bombs in the same few spots. I thought that was a bit off putting, but with the new update and limited shots, you can’t really keep firing off shots and this issue seems fixed. 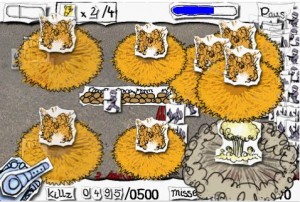 For $1.99, Crap of Defense could go either way for me. There are a lot of levels and gameplay, but it gets a bit redundant. With that said, I really like the Winter Assault update; it has given the game a new much needed challenge.  If those kinds of updates continue in the future, this game might become a must buy.