Vampire Origins is an iPhone/iPod Touch adventure game in the mold of Resident Evil.  Though announced over a year ago, this game was just delivered by Chillingo about a week ago.  While the game’s graphics are a bit dated, the unique setting and controls help catapult this game to the top. 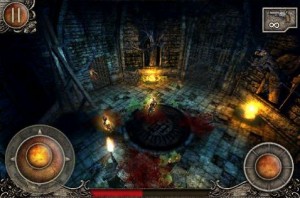 This game has a lot of different aspects to it.  For example, you have a stamina bar, ammo constraints, a mission driven need to collect pages, relics, guns and more. Not only can you choose between different guns to use on your enemies but you also have to figure out which would be the best way to dispose of your enemy.  Are you in close combat?  A shotgun is a good choice. Are you just killing annoying bats flying over head?  Use your basic pistol with unlimited ammo.

The game makes it easy to lock onto your targets.  If you have ever played games like, “Dead to Rights” or “Max Payne” then this is right up your alley.  In order to lock on to the enemy, you simply tap the enemy and then shoot.  This is a great feature, I feel, because you don’t have to just spin around in circles hoping that a stray bullet will eventually hit your foe. 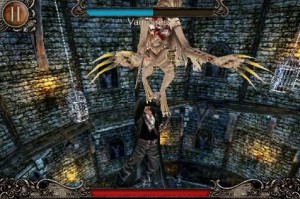 The navigation in this game is very nice.  You simply hit the way you want to go on your screen and you go that way.  However this is not a side scrolling game.  What I mean by that is, it’s not like Contra use to be where you just keep walking and the background changes.  In Vampire Origins you are walking across the screen.  When you get to the end of the screen, it will then go to a whole new background.  Generally there is something new on every screen such as enemies, new relics or just something that you have to figure out. 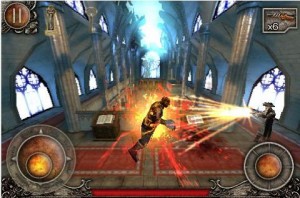 This game is not just about killing people either.  There is an actual story involved with it as well.  The story itself is pretty good and the fact that there is a graphical comic book explaining the story made understanding what was going on even easier.  A very nice feature in this game that I liked a lot was that there were puzzles involved with it.  For example, early in the game there is a creature on the loose that you run into.  You have to figure out how to trap it so it will not attack you or cause any harm to anyone else.  I like this type of strategic planning in games.  In general, it helps to break up the monotony of running and shooting. 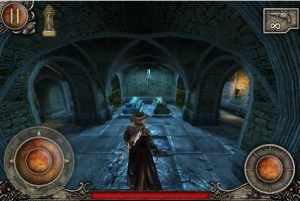 The graphics in this game are very nice.  This is a pretty detailed game for playing it on a 4″ screen.  You are able to see every enemy either catch on fire or leak blood or bile when they die. Pretty sweet.  The background sounds and music are also done well throughout.

Vampire Origins is a very fun game.  I have never been a huge fan of vampire fiction, and I don’t consider myself part of the vampire craze that is going on now. However, this game made me buy into it a bit.  I found myself wanting to play it more, the further I went along, which I don’t find with too many games.   The graphics are great, the story is good and it made me want to come back for more.  All and all this game is well worth the price point and I would highly recommend it!