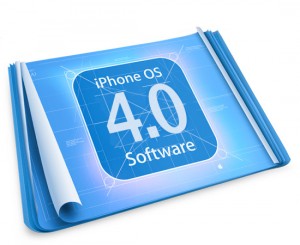 Developers everywhere now have the ability to begin using OS 4.0’s new functionality right away.  In fact, even if you’re not a developer, you may be able to secure access to 4.0 well before the rest of the public does in summer (very likely to be on or around the reported June 22nd iPhone HD release).  For a small fee, some developers are willing to add you to their development license thus granting you the ability to use 4.0’s newest features including multitasking, folders, and increased levels of customization.

Interest in the OS release has reached a fevered pitch over the last week.  In fact, one of Google’s top searches is currently people trying to get the OS and/or find out more information about it.  Our team of writers is currently making an effort to get an early look and when we do, we plan on writing several features talking about the new features leading up to the public launch date.

It is worth noting that those folks that jailbreak will want to wait to update.  4.0 has reportedly already been cracked by the dev team, however the release of that exploit has not been publically published and may not be until the official Apple release of the OS.  The reason being, Apple would very likely close that exploit well before the actual release to the public.

To be added to a developer’s list, that developer needs one key piece of information – your phone’s UDID.  If you’re not sure how to find that information, it is a fairly simplistic process.  Simply hook your phone up to the computer you use to sync.  Open up iTunes.  Under devices, click on your iPhone or iPod Touch.  Next, see where it says serial number?  Simply click that number once.  Voila – your UDID appears.  Find a developer that will show you some love and get started using the OS 4.0 beta today.