The Sims 3 World Adventures is a tough game to review.  While it does add a lot of new content to the original iPhone/iPod Touch Sims 3 release, it doesn’t change the way anything occurs within the game.  You are still responsible for making money, doing the day to day banal activities of everyday life, and going to work.  The main issue here is that it is kind of hard to find the time and money to be able to take advantage of any of the new features within the game. 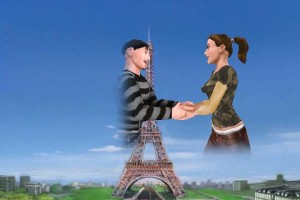 The game derives its World Adventures name by giving you three locations, France, China and Egypt, around the world that you can travel to.  Each of these locations has wonders of the world for you to visit.  For example, in Paris you’ll see the Eiffel tower and in Egypt you will find the Sphinx.  Each location you visit actually has 2 major tourist attractions.  Each of the tourist attractions are nicely rendered within the game but when it comes down to it, the visits are fairly disappointing.  For example, while visiting the Pyramids, you tap that you would like a tour and then the game shows your person literally flying around in bizarre snapshot photos in weird positions.  Each of the landmarks has the ability to be mildly explored but really it just involves a simple mini-game.  And while the four additional mini-games World Adventures adds are nice, they don’t add a lot of substance to the game. 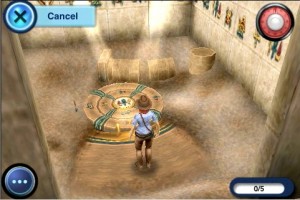 Securing enough funds to have a good trip to another country can be a difficult task.  You can always start the game with a new character and immediately take a trip (on a very limited budget) but if you try and settle down, get a job, and buy some stuff for around the house, you may be waiting a while to get to go to any of these exotic lands.  What’s worse is that your character will likely continuously have desires to learn new languages or cooking recipes that you can only learn in these foreign lands.  The end result is that sometimes it can be difficult to make your sim a happy camper. 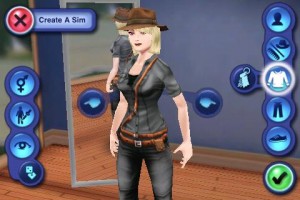 If you played the previous version of the Sims for the iPhone or iPod Touch, you may already have a character created.  If that is the case, the game does allow you to import that character into World Adventures.  The games music and graphics are both well done for the exotic locales.  Each has a different feel.  In Egypt you will be able to go to the market and buy some souvenirs.  You can even upgrade your bartering skill and get a lower price. 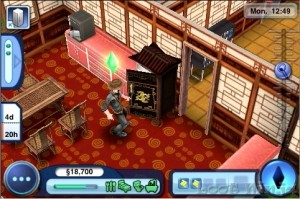 Unfortunately, not enough is new in this version of the Sims for iPhone and iPod Touch users that have already bought the previous version to take a second plunge.  While the game does add quite a bit of new content, the difficulty of getting there and the letdown of actually visiting the location’s famous landmarks doesn’t make it worth buying for anyone but the most ardent Sims enthusiast.  That being said, for those of you who haven’t bought the first version of the game, this one is well worth the price of admission.