Koan is the newest iPhone/iPod Touch game from the same developer that created TheWall, the social networking geo-location app that we at iPhone Gamer Blog raved about. Koan is an addicting time-based puzzler that uses 25 puzzle pieces that kind of look like M&M’s. The object of the game is to keep moving and keep refreshing your time, while trying for a higher score. 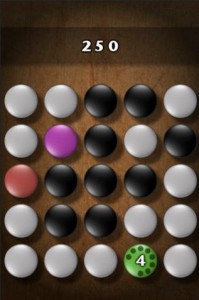 When you game starts you are given 25 white game pieces, each time you move, your previous piece turns black. Black is the only color you cannot move to. Along with black and white pieces, there are gold, blue, red and purple. Blue pieces, when moved to refill your move clock, which is represented by the countdown on your game piece. Red depletes the clock by one second. Purple changes all of the black pieces back to white ones. Gold pieces are worth 1000 points; all other pieces are worth 50.

There is a definite strategy to Koan. Move wisely. As time continues, some black pieces will automatically change back to white. So slow, well thought out moves are important, even when running low on time. When a purple piece appears remember that it changes black pieces to white, but also changes white pieces to black. So try and minimizes the white pieces before selecting a purple piece. 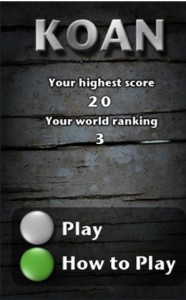 The game play is pretty flawless. At the menu screen you can other choose Play or How to Play. I suggest running through the How to Play, it takes seconds and does a great job breaking the game down.

The graphics, as well as the audio are simple but good enough not to hinder the gameplay in any way. The audio is secondary and very noninvasive, which is good for a puzzler. And the graphics are mainly just the puzzle pieces and they look pretty good. But I don’t think this game is about how it looks and sounds, the addicting game play is where the fun is.

This is a great fun game with endless amounts of game play. Personally I’ve played it probably 50 times, and that’s probably why I’m ranked 9th in the world. Oh ya, after you finish a game you are shown your personal high score and what rank that score is globally. Pretty cool huh? 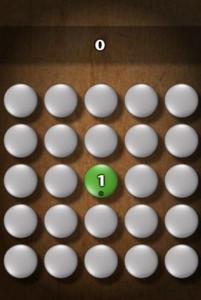 Koan is a must have game. It’s so addicting. You can squeeze in a game in a few minutes and every time it is different than the time before.