Honey Pot is a game that is very similar to Tetris, but puts a new spin on an old idea. Using the theme of honey and a beehive, the game’s puzzle pieces are shaped a lot like the five or six puzzle pieces that can be found in Tetris, but instead of squares to make the pieces, the developers of Honey Pot used hexagons. This gives the game a unique look that tries to help set Honey Pot apart from being just another Tetris clone. 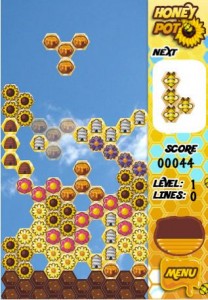 Another game aspect that sets Honey Pot apart from the original Tetris is that the pieces are made up of different cells. For example, you will see cells made of flowers, honeycombs, bees, baby bees, honey pots, and so on. Some of these little cells are relevant to the gameplay itself. For example, if you have a piece made out of dripping honey cells, that piece will melt away the pieces directly under it when placed. The baby bee cells means that piece will fill in gaps in your puzzle when placed. There are seven special pieces, all of which are explained in the instructions within the game.

There are three types of games in Honey Pot, each with a different degree of difficulty. The easiest game is Queen Bee. During Queen Bee gameplay, you can use the special pieces to help clear the screen and the more pieces you use, the fuller your honey pot gets. When the pot gets full, the screen clears. 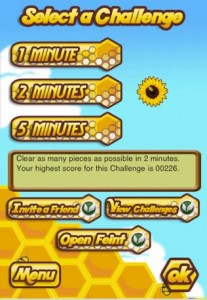 The Worker Bee mode is the next up in difficulty from Queen Bee. The only difference is that the screen does not clear when the honey pot fills. Soldier Bee is the hardest mode. There are no special pieces or honey pot to help you in this mode.  There is also a challenge game where you are given a set time limit to try to clear as many cells as possible. This is pretty fun and quick. If you have a good round you can publish your score on OpenFeint.

The graphics are of a high quality, even while just in the menu. During gameplay, the puzzle pieces, although small, are easily recognizable. The sound is ok. The music during gameplay is a mellow soothing song with nature sounds. If you can imagine, it almost made me fall asleep. The sound FXs are fairly simple. You get little noises when you tap to rotate a piece and a noise when you swipe down and a piece lands. 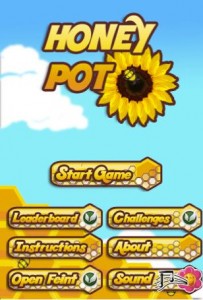 Honey Pot seems to be aimed a little more towards a younger crowd, but has levels of difficulty that could appeal to an older crowd as well. I really like what the developers did using specials cells to add a variety to a simple game, but I think it’s still will fall in the category of “just another Tetris game.” At only $.99 it’s not a huge investment, but unless you are a huge Tetris fan looking for a new twist, I’d probably pass.