Motocross Challenge is a new look at a classic Nintendo game, ExciteBike. The two games have very similar styles of gameplay including a left to right scrolling screen, a refilling fuel meter, and those tumbling crashes that seem to last forever. 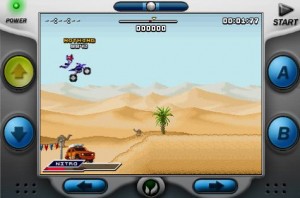 When the game first opens you will notice that the screen is split up, separating the game “screen” and a section for buttons. This makes the game have a GameBoy type feel. I’m not a huge fan of this type of setup, but sometimes buttons are necessary for successful game play.

There are three different types of race modes; Beat the Clock, World Tour, and Trick Attack. Beat the Clock is just that; you must finish a three lap race under a predetermined time set by that level. A World Tour race is a little more difficult because you are racing three other riders, so crashing late in the third lap usually means you are going to lose. Trick Attack races consist of you having to surpass a set score. You score points by completing aerial tricks and successfully landing them. Also, a thing to remember is that a completed trick will add fuel to your bike. So the more tricks you do, the more fuel you will have. 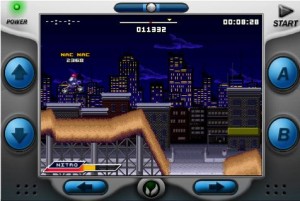 The controls, as I stated above, are mainly touch based with the exception of tilt. When in the air some bikes tend to lean forward or backwards. However, you can control bike tilt by leaning your device one way or the other. This comes in handy when competing in a “Trick Attack” race where your goal is to complete as many high scoring jumps as possible and landing them is a high priority.

The game’s audio is pretty fun. With that I mean the music is catchy, in a kind of early ’90s way. The sound FX are basically motorcycle noises, a grunt, and a warning noise when you are about to run out of fuel (just like ExciteBike).

The graphics seem a bit old and dated. They have the look and feel of an old console game, but at the same time it fits well with the music and theme of the game. Realistically, they could be better but they don’t need to be in order to enjoy the game. 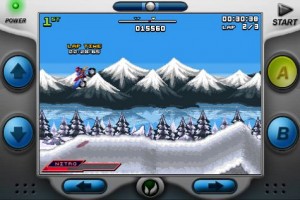 Motocross Challenge is a fun game. I’m not going to beat around the bush; if you liked ExciteBike for Nintendo, then you are going to love this game. It has the basic premise of EB, but adds tricks and challenges to an already fun game. Plus, it’s only $.99.