Chokoblok is an iPhone/iPod Touch puzzle game that’s gameplay has been seen many times before. In fact, if you’ve played a lot of Flash games in the past I’m sure you’ve run into something a lot like this one.

The object of the game is to get a rectangular block to fall through a square hole in the game board. To do this you must roll the block so that when you stand it up, it falls through. Sounds simple right? Eh, not so much. The game boards change every level and they get difficult. Some levels have paths that are only one square wide, not to mention you can fall off the edge, so you really have to think ahead and plan out your moves. 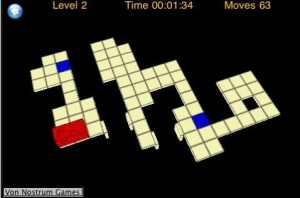 The controls are nice. To get the block to move just swipe the screen in that direction. It might take a few levels to get use to it, but you will catch on quickly.

The graphics aren’t good. They are very simple designs with blah colors. The game board is beige, the block is red, and the pressure tiles (the work trap doors) are blue. The coloring isn’t anything special, and even the background is just left black. I understand that you can fall off and they might want it to look like space, but most of the screen is left black.

The audio matches well with the gameplay. However after awhile the background music gets boring and repetitive. There is an option in the menu to turn off the music and listen to your own songs. 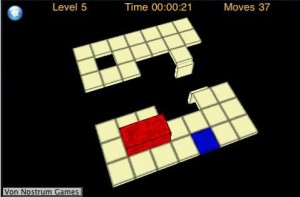 I’m just not a big fan of this game. Even though the board changes every level, the gameplay itself is exactly the same. It’s fun for about 10 levels but then it loses its luster. There is a lite version if you want to give it a try. If you like it, the full version is $.99.