Pounce in iPhone/iPod Touch card game that is tough for me to describe.  Mostly because the rules of the game are a little complex and describing card games has never been my forte, even in person.  Nevertheless, I’ll do my best and tell you that first off, the game is a mix of speed and solitaire.  It also might be worth mentioning that the general guidelines of the game are extremely similar to other card games with different names including Nertz, Stits, Nerts, Nerks, Dooker, Canfield, Crunch, Nirts, Nerf, Gluck, “Blitz”, Maxcards, Peanuts, Popeye, Snerds, Solitaire Frenzy, Scrub, Stop, Squeal, Squeak, Squid, Squinch, Swish, Racing Demon, Race Horse Rummy, Lucky Thirty, Grouch, Hell, Hallelujah, Hoorah, Mertz, Moofles, Flip Flip, Knertz, Nuts, Nutz, Nutsy, Double Dutch Bus, Snatch, and Nerds (this is according to Wikipedia). 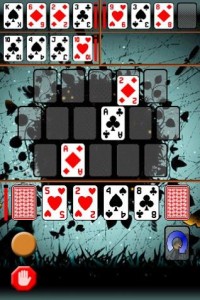 A single player game begins with you choosing how many computer opponents you would like to play against.  You can add up to 4 opponents and for each one choose a separate difficulty setting.  The more computers you add, the more complex the game will be so if this is the first time playing, I recommend you start with only one.  Better yet, try out the built in tutorial which gives you a pretty good idea of the actual rules of the game.  The game also offers multiplayer mode which allows you to play with friends in the same room as you via Bluetooth.  Unfortunately, I wasn’t able to try this out.

The actual game itself is very intense.  The actual setup of your cards involves you having 6 piles.  Four piles are face up and each of those piles has a single card.  These are the four piles you are trying to get rid of.  On the left of those four piles is a draw deck.  If you are able to play one of the cards in your four piles in the middle, you use the draw deck and put the new card you draw back into the pile you just emptied.  If you are able to completely use all of the cards in the draw deck you can shout POUNCE and the round is over.  You receive a ton of points for getting a POUNCE and you also receive points for playing individual cards in the middle.  The final pile of cards in on the right side of you.  This pile allows you to flip through the leftover cards one at a time to see if you can move the game along.  You can play these cards off of the four piles of cards in front of you or in the middle if possible.  If all of this sounds incredibly complicated, it is.  The truth is that this game takes a bit of playing before you will get the hang of it. 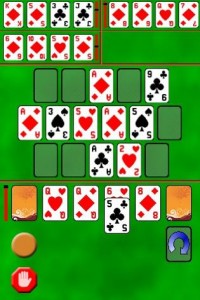 If you really like games where you need to make split second reactions and enjoy playing against some fairly good competition, Pounce is a good choice.  The rules do eventually make sense but don’t go in expecting to just be able to pick it up and go unless you have played the game before on a real card table.