Captain Glyph is a word game where you must find words ranging from 3 to 7 letters long. The letters you must use to make words are located on wooden crates that fall from the top of the screen. When letters are adjacent to each other and can spell out a word, simply touch and drag in the spelling order. Keep in mind that you can touch and drag in any direction as long as it is in spelling order. 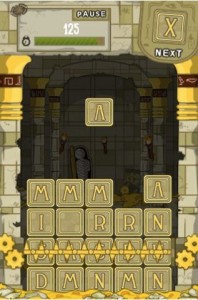 To offer a little help, you can control the crates as they fall. This allows you more control of the game and helps you to create words. There are also a few miscellaneous crates, a time bomb, an hourglass, a letter switch, and a blank. The time bomb ticks down and explodes when tapped, but doesn’t blow up any other crates just itself. The hourglass stops crates from falling for a short period of time so you can look over your crates for any missed words. The letter switch allows you to swap any two letters on the board. The blank crate is just that, blank, and no it’s not like scrabble where the blank is anything you choose. In this case it’s a dead space.

The game’s controls are very easy, everything is touch based. When a crate is falling you can touch and drag. To highlight a word, simply touch and drag over the letters to spell out the word. All of the special miscellaneous crates are activated with a tap. 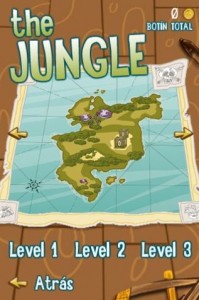 The graphics are very good. They are cartoony but not to the point where you feel like you are five years old. However, the graphics do have a Sponge Bob attribute to them. There are six locations, each with three levels. Each location has a different graphical and audio theme. The six locations are the jungle, the desert, and the volcano, the ice cave, the ocean, and the future. Each location has the same set up as far as location of the pause button and score, but changes dramatically visually.

The audio, like the graphics, change along with the location. Each location has a fitting song that loops during gameplay. For example, the jungle song has a tribal drumbeat and the desert song has an Egyptian sound. The songs are good, but like any other music, after hearing it over and over you will get sick of it. There is an option to turn the music off if necessary. 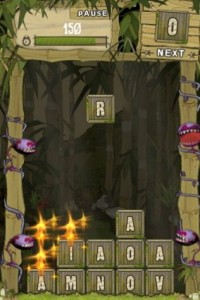 If you are really into word games then you should check out Captain Glyph. Personally, they aren’t my favorite niche of gaming.  However, for $1.99 this game has hours of gameplay. So if you won the 5th grade spelling bee and are looking for some wordy iPhone games be sure to check this one out.