Enter Groov-EE, the jogging stick figure with an old school boom box for a head, and tour guide on this ride through your personal iTunes music library. Somewhat of a mash-up between Dance, Dance Revolution and a drawing application, Tune Runner Fusion uses music on your iPhone o0r iPod Touch as a soundtrack for each level of the game, allowing for seemingly endless variations and combinations which are only limited by the content on your device. Essentially a time waster app that gives people something to do other than twiddle your thumbs or stare blankly out the window while listening to music.  Unfortunately, Time Runner Fusion doesn’t quite capture your attention the way the developer had hoped. 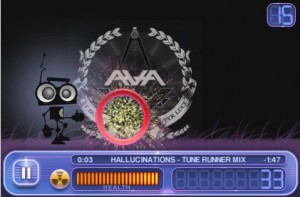 While there’s a free version of this app readily available, it only allows people to play though ten songs before requiring the $1.99 fee for a full purchase. Many people might start howling, “Why should I pay money to listen to my own music?”, and honestly that is a question worth asking. While playing, a series of shapes are presented, which must be traced to keep Groov-EE dancing and preserve his health meter. Completing multiple combos and surviving the round generates points and achievements, which can be shared with other players around the globe via OpenFeint. Sure, this app does serve as a somewhat entertaining game to toy with while listening to a few songs, but the overall replay value and quality falls short or something worth buying.

Aside from watching Groov-EE pull off slick dance moves such as “The Worm,” or doing front and back flips, there isn’t anything visually spectacular in Time Runner Fusion. With each successful obstacle passed, our stick-like boom box headed hero dances around as the shape illuminates electric yellow with a little green smiley appearing to signify the achievement. For each mistake, you’re rewarded with a red frowning face, and a portion of Groov-EE’s health bar is subtracted. As the game side scrolls its way though each song, the background remains highly busy, with everything from bubbles to skulls to lightning flashing across the screen. 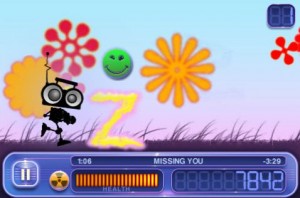 The easiest feature to appreciate is the sound, but only because the quality is solely dependent on your own music collection. There are some bloopy sound effects while you’re tracing the variety of circles and sevens thrown your direction, but the real reason to play is to listen to your music library. This really takes the pressure off Appy Entertainment to create their own tunes and sounds, leaving this responsibility up to the player.

By far the most irritating aspect of the game is the control, which becomes even more confusing when Groov-EE speeds up or slows down for no particular reason at all. The game doesn’t follow the beat of each individual song, and even though every “level” is slightly unique, the selected song is practically irrelevant. Instead of using the vast variety of music and genres to their advantage, like games such as Tap Tap Revenge or Guitar Hero, this app presents a pile of repetitious tracing without much rhyme or reason. The circles are the worst obstacle of all, which never seem to register correctly unless you’ve managed to complete a nearly perfect shape. 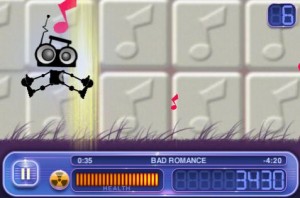 Tune Runner Fusion begins as an interesting concept with entertaining prospects, but the execution and gameplay subtract far too much for this to be a successful title. It’s mildly fun for a couple of songs, but mainly due to the use of your own iTunes library. Nothing personal against Groov-EE, but this one could’ve been pulled off better if Appy Entertainment spent as much time on designing the controls as his variety of dance moves.