Tiki Smasher is children’s game where you must protect your Tiki statue from attackers. The game has two modes, campaign and survival. The campaign mode consists of multiple levels or islands where different evil doers try to attack your statue. The only way to protect your statue is by rolling over the attackers with a rock.  When you squash an attacker, you gain coins that will allow you to upgrade your rock. You can upgrade the speed, bounce, and power. 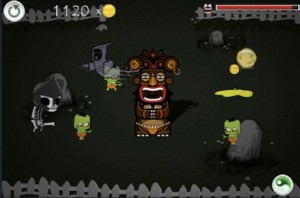 The survival mode consists of seeing how long you can keep your statue safe by protecting it with the rock.  You do this the same way that you do in the campaign mode, but unlike the campaign, there is no specific end.  The game simply ends when you can no longer hold back the attackers.  You move the boulder around by tilting your device in the direction you want it to go. 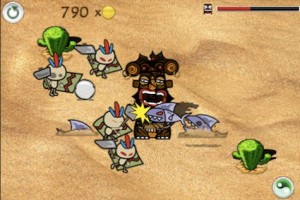 The graphics and sound in this game are decent, although they are a dead giveaway that the game is directed towards a younger audience.  That’s not to say it is a bad game, it’s just meant for a younger crowd.  Most adult gamers will find the gameplay a bit too simplistic and easy to master.  For the younger crowd, this game could be a good introduction to iPhone/iPod Touch gaming.