Does anyone else feel the need to satisfy their insatiable appetite for, uh, dice?  Hmm, that’s what I was thinking too, but just in case you’re a dice enthusiast, Newton’s Dice 3D is here to save the day. Well, maybe not the whole day, but at least an hour or so. The realistic, well rendered application features a free roll mode as well as two games for your rolling enjoyment, as well as instructions and multiplayer support for up to five people. 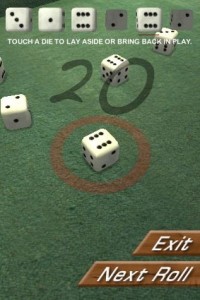 Newton’s Dice 3D is fairly simplistic in its design, but remarkably realistic, as far as the dice physics go. Executed better than your average Yahtzee app, but not necessarily more entertaining, the options and games are pretty limited here, with essentially only two available. Sure, there’s a dice throwing mode, but all you’re really doing is picking how many to roll, shaking the device, and then watching them fall. Not exactly what I’d call exhilarating.

The two games, 10000 and Shut the Box, are both decent.  In 10000, you take turns rolling dice; select which to keep, generating a score, and the first player to reach the 10K mark wins. 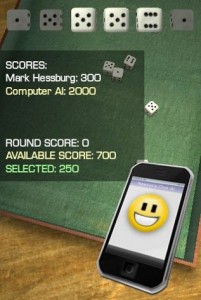 Shut the Box is a little better, and uses one pair of dice and a group of tiles numbered one through nine. On each roll, you use the total rolled to close one or more tiles, which becomes increasingly difficult as your turn progresses. When you can no longer close another tile, the remaining ones are added to your penalty score, and the person with the lowest score at the end wins.

The app’s visual display is minimal, but clean and smooth as far as animation and graphics go. The dice drop out of the cup slowly, bouncing off each other and rolling across the board until they reach a soft landing. Around the playing area are a lamp, brick wall, and green double doors, with the board set down on wooden round table. After rolling, the camera circles around with a slick aerial shot of the dice landing, and if you’re lucky enough to beat the computer a bunch of flashing colored lights grace the screen, signaling your triumph.

For the audio effects, or lack thereof, all that can be expected is the sound of dice being tossed into a cup or rolling onto the playing area. Of course there is the unusual, tribal-esque background music that sounds like it might be from the Jumanji soundtrack in the opening menu and while shaking the iPod, but that’s about it for sound. 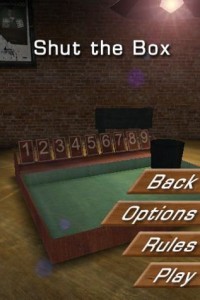 Possibly if you’re a fan of dice throwing apps this one might appeal to you, but there just isn’t enough going on in Newton’s Dice 3D to generate excitement. The control is basic since it only requires you to jostle around the device, and the graphics are alright, but it ultimately comes down to the simplicity of the product. With many other iPod apps and games becoming increasingly complex and involved, this one seems to be heading in the wrong direction. Besides, if dice is really your game, chances are you’ll be playing the real thing instead of some digital iPod simulation.