How can guiding a triangle around on a screen and doing your best to stay away from red dots be the basis for one of the most addictive iPhone/iPod Touch games to date?  Tilt to Live answers that question in remarkable form.  In the newest edition of the game, 3 modes are available that each offer different challenges and addiction.  If this game is not this year’s indie game of the year, I don’t know what is. 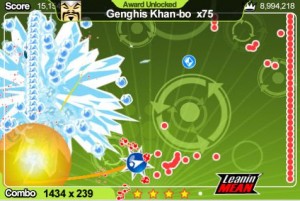 3 modes are offered including Classic, Code Red and Gauntlet.  While Classic is similar to Code Red (in fact code red is just a much faster version of Classic), Gauntlet offers up something entirely different.  Each of these modes involves you guiding (via extremely accurate tilt controls) a white arrow through an oncoming herd of red balls.  These balls will actively pursue your arrow through on the screen.  In Classic Mode, the game is slowed and progressively gets more challenging.  In Code Red, the red circles immediately begin their pursuit and their numbers are massively increased.  I tend to find this mode more enjoyable, especially after playing the game for a few hours.  The games are usually much shorter but the action is all the more satisfying.

So why is this game so good?  There’s something I’m not telling you.  The reason these 2 modes are so brilliantly conceived is due to the weapons you can use to destroy the red circles.  You start with just 3 but after winning “awards: (read: achievements), the number of weapons increases to 8.  Some of these weapons are incredibly efficient, giving you the ability to wipe out a 100 red dots of doom at a time.  Any one of those red dots can instantly end the game so some of the weapons are brilliantly conceived to help you eliminate that threat.  One of those weapons is a vortex that will begin sucking up the red dots in black hole fashion.  The first time you see 2 of these black hole type devices sucking in everything on the map at once, you will be hooked.  This game is simply badass. 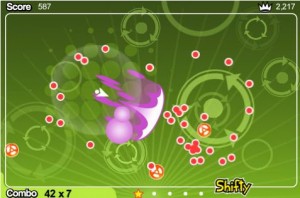 The Gauntlet allows you to slowly build up the tension using a much slower pace.  In this mode, your arrow flies forward at a continuous pace.  Obstructions (made out of red dots and other barriers) are continuously created.  The tough part here is that not only do you have to maneuver your way through the red dots but you also have to continuously collect the green orbs that lie within the red dot structures.  This gets progressively more difficult as the level continues.

In all modes, the game will inevitably end with your death.  It’s how long you live that really matters here.  The game is held together with a ton of humor and a great social networking aspect.  In this case, you’ll be able to win awards and compete with other players across the world on the Agon network.  It ends up being a lot of fun to see how many of the secret achievements you can earn. 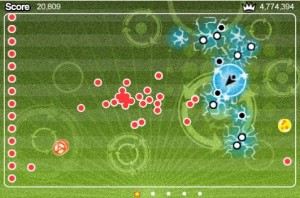 At .99 cents, this game is simply a must buy.  In my opinion, it is in the top 5 of all games that have been released for the iPhone and iPod Touch, especially at the minimal 1.99 price point.  Do yourself a favor and pick this up today, and if you have any friends whose birthday’s are coming up, do them a favor and gift it to them.  This game is an instant classic, worthy of your immediate attention.