Dig out those old flannel shirts and Doc Martens, Tap Tap Revenge Nirvana is here! Featuring 13 classic songs from one of the most iconic bands in rock history, Tapulous scores another hit in their popular series of musical tapping fury titles. Four difficulty levels, multiplayer battle mode, and some bonus treats scattered throughout are just some of the features in this headbanging app. 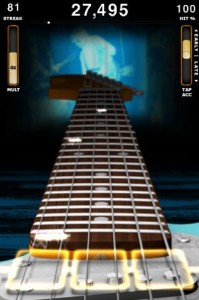 Whether you’re a Tap Tap virgin or an experienced veteran, Tapulous designed this one to keep you tapping along for hours, similar to the other titles in their series. The value is definitely there, however the scope is somewhat limited unless you’re a Nirvana fan, which makes this a must have, especially if you’ve enjoyed other Tapulous games. From the lollygagging easy mode, to the lighting quick, heart attack inducing extreme difficulty setting, players can feel free to challenge themselves as much or as little as possible.

The Nirvana theme is crisp looking, as the rectangular white bars surge towards you in relentless fashion while they ebb and flow with the distorted sound of the music. While playing, old photos of the band float along in the background, as each of the squares illuminates after each successfully timed note. Breaking off 50 consecutively allows you to shake the device, triggering the 8X multiplier, causing the screen to flash pink and white colors, as the intensity builds even further. 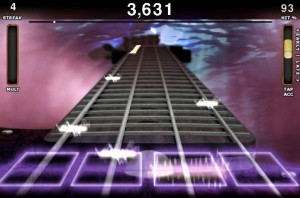 Without decent sound, this would be a complete bust, and Tapulous hit the nail on the head with the game’s soundtrack. Featuring classics such as “Smells like Teen Spirit,” “Come as You Are,” and “Heart Shaped Box,” the song selections are decent enough to keep people coming back for more. There are also live versions of “Lithium,” “Breed,” and others for an added twist while playing. Certain songs are preceded by rare interview clips with Kurt Cobain, as he describes the song using his insight and personal thoughts. The only aspect missing is some rarer or older songs, as most of the tracks included were popular radio hits that most people have already heard numerous times.

While progressing through the difficulty levels, the speed and button combinations become increasingly intricate. There are some issues with timing on occasion, where Tap Tap insists you missed a note, but it doesn’t seem quite possible. Other times during extreme mode, it becomes so insane that it’s difficult to tell what buttons are being pressed when, as you furiously struggle to keep up with the blistering pace. On occasion, you’re presented with some combos which seem to require three thumbs to successfully pull off, so be prepared to attempt to defy human anatomy at some point. 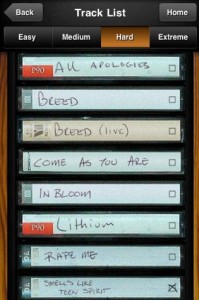 Nirvana and alternative music fans will be rushing over to iTunes to snatch this one up, while those searching for the latest Lady Gaga app will probably take a pass. The multiple levels and Bluetooth supported battle mode easily extend the fun, although some of the control timing can become confusing, and possibly even frustrating. This is an easy hit for Tapulous fans, and capable of appealing to music fanatics seeking an interesting game on the mobile platform.