Sneakily climbing up trees, jumping stealthily past obstacles and collecting power-ups that steadily move you higher and higher is what Ninjatown: Trees of Doom! is all about.  As a ninja, it is your responsibility to climb endlessly until you can climb no more.  Very much in the same vein as Doodle Jump and BirdStrike, this game will be as addictive for some and less so for others that adore the Up and Up (I just called it that for the first time) genre of gaming. 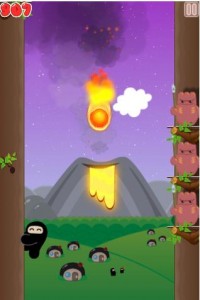 Venan Entertainment, who brought us the fabulous iPhone and iPod Touch game, Space Miner, last year goes in an entirely different way with their newest game.  As before, this game is extremely well polished.  The number of power-ups you can earn are many and the social networking aspect is built in as well so it is easy to challenge your friends.  However, I am a little disappointed with the action.  Unlike other games in this genre, there is no reason to climb or move quickly.  Instead you are able to go at your own pace.  Most of the time you can just keep your ninja where he is without worry that he will be hurt.  In my opinion, this lack of drama causes the game to be a little lackluster.

The graphics are incredibly cute and so are the sounds.  Everything feels right about this game except I just don’t see myself going back to play it now that my review is done.  Couldn’t they have added in a timed component or a way of killing the enemies with ninja stars or something?  Once you lose your grip and fall, that’s it.  Game over.  Time to start the climb again at the same incredibly slow pace.  For me, it just doesn’t work as well as it should. 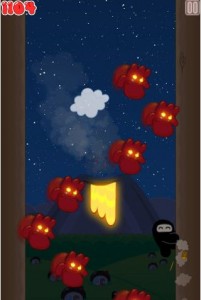 I know people are going to love this game and say I’m wrong with my final grade.  I can accept that.  Those people though are ones that thought that Doodle Jump was too fast or that BirdStrike was too difficult.  For me, I want a game that continually challenges me, especially since a game like this is usually played in just a few minutes.  In Ninjatown: Trees of Doom! you could literally make a game last hours as long as you are careful.  To me, that isn’t as interesting as continuously being pushed forward without any ability to slow your character down. 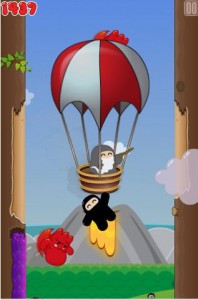 For those reasons alone, I’m going to have to pass on this one.  Everything is so well polished that I really want to like it.  If they would add something that chases you upward or a timed gameplay mode I think I would be all over this one.  As it is, I felt it was a little too barebones to be worth $1.99.