Steam Wars is a game about warring robots.  Did that peak your curiosity?  If not, you’re probably looking at the wrong game review.  This game involves two different robots fighting it out on a world of your choosing.  As you win battles, you unlock new worlds and robotic competitors. 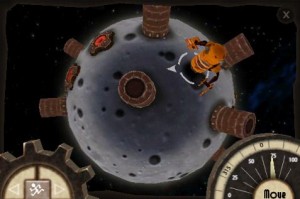 Your robot runs on steam and every action costs a certain amount of steam.  That includes walking and shooting.  Much of what you do within the game requires a bit of strategy.  Should you shoot a missile at your enemy or should you walk behind a defensive barrier in order to get a better shot during the next round?  While shooting, you a presented with something like a golf game shot meter.  The longer you keep the fire button pressed down, the further your shot will go.

One of the coolest things about the game is that it is entirely 3D.  You can rotate the screen to show you any part of the world.  The controls to do this have been simplified.  One of the more difficult things to get used to is that when you want to turn your robot, you have to turn a dial (shaped like a gear).  Often times, I found myself forgetting to do this.  One of the other weird control quirks is that on the left side of the screen, there is a dial that allows you to pick your action (whether that be walking or shooting a specific weapon).  If you accidentally pick the wrong thing and click fire (which is the dial on the right), you’ll end up walking instead of shooting.  After a while this becomes easier but it may take a little getting used to. 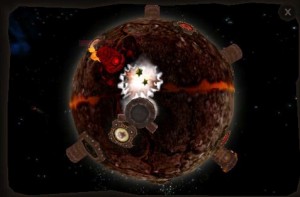 The sounds within the game are fairly well done.  The music is a campy, yet classic sounding space theme.  The explosions and shots fired also have satisfying resulting boom upon hitting your target.  The graphics are well done for an iPhone/iPod Touch game although I would have liked to see a bit more variety when it comes to planets and robot enemies.  Most of the planets seem about the same when it comes down to it.  It would have been nice to have some natural barriers like mountains or rivers instead of only artificial ones that can be blown up. 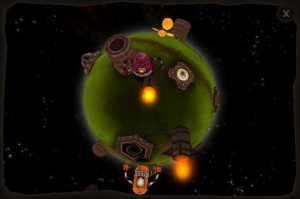 When it comes down to it, Steam Wars is a solid effort by Illogika Studios.  The action, along with the strategy required to do well are interesting and besides, who doesn’t love robot wars?  If you’re looking for something akin to new-age chess then this one is well worth the price.