Bird Strike is yet another one of the Up and Up genre of games that are so popular on the iPhone and iPod Touch platform.  In the same vein as Doodle Jump, your job is to take the exceptionally cute sounding and looking Gerald (a blue bird) up as high as you can.  Unlike Doodle Jump which has only one game mode, Bird Strike has two and each have a different gameplay mechanic.  Over the last month I have been playing this game like crazy and in many ways, it has entirely replaced my Doodle Jump addiction. 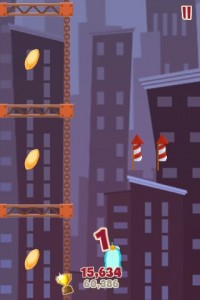 The games first mode, World Tour involves you selecting one of four continents.  Each continent has 3 or four maps that you can play.  Each map has a bronze, silver, and gold point level that you are striving to reach.  In Bird Strike, the object of the game is to go as high as you can by using a series of rockets (both of the jetpack and firework-looking variety).  There are also a series of additional power-ups that you can pick up on your flight up as well.  The difficulty begins with maneuvering Gerald (via tilt based controls) in between the many obstacles each stage has.  Much of the game involves you falling back towards the earth and frantically trying to find a rocket below in order to propel yourself upwards.

That challenge is a lot of fun but another innovation was added to the Doodle Jump-like gameplay that really makes this a brilliant experience.  At some point on these World Tour mode levels, you will inevitably reach a space ship.  That space ship will shoot you down and you will begin an incredibly fast descent all of the way back to earth.  On the way down you have to maneuver your character to cause as much damage to the obstacles you passed by on your way up as possible.  This part is incredibly fun and keeps the game interesting.  Even better, the whole stage can be completed in just a few minutes meaning its perfect for a quick break. 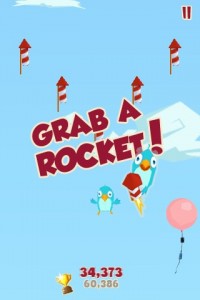 The second mode is much more in the same vein as Doodle Jump.  Named Endless Mode for a reason, you try to maneuver your bird as high as possible.  The first 10,000-30,000 points are fairly simple to get but as you get higher the obstacles become tougher to maneuver around.  Even cooler, it is literally a 2 click process to challenge one of your friends to beat your high score on the OpenFeint social network.  The ease of challenging your opponent actually makes it worthwhile and something I do from time to time. 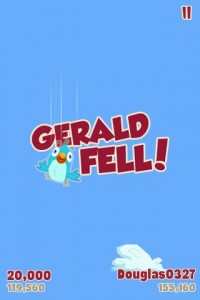