Games like Edge are few and far between.  The idea is fairly simplistic but the implementation is extremely well done.  In Edge you move a box through a series of platforms trying to get to a final destination point.  Upon the way you will have to maneuver your three dimensional box through moving platforms, trap doors, platforms that fall apart after you roll on top of them and more.  As you get further into the game, each level becomes more complex and thus, more challenging. 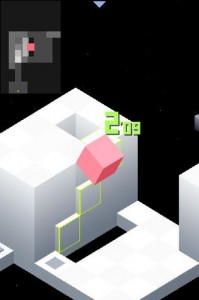 While the graphics for this one are fairly simplistic, they work extremely well for a game of this type.  The main thing here is the smoothness.  You’ll find that despite occasionally being whipped around a level incredibly fast (especially if you can catch a ride on a moving platform), there is no noticeable slowdown at all.  In fact, the smooth graphics along with a few additional nice touches make the game surprisingly easy on the eyes.

The music within the game sounds very much like an old 8 bit Nintendo game.  In other words, it’s not exactly MP3 quality.  That being said, there are 18 different songs but if those aren’t your kind of music, you do have the option to not activate the sound in the game at all.  That makes it pretty easy to start your iPhone or iPod Touch music player and use that during the gameplay.  As far as the actual in game sound, you really only hear the box as it flips over and over again. 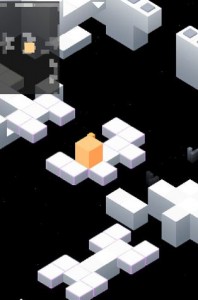 The controls can make or break a game like this.  Fortunately they are pretty touchy in a good way.  Despite the fact that you are controlling a block, you really have as much control as you need.  The controls are entirely touch based and depending how much or how little pressure you use to bring the square block towards the way you want it to go, it will roll faster or slower.  Overall, they are well implemented and will gradually become more comfortable to use as you play through the game. 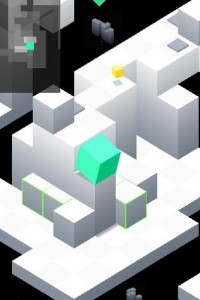 This game has a tremendous number of levels, 46 in total.  Each of them is extraordinarily different and the higher levels require quite a bit of strategy.  Luckily, even if you guide your block to its doom by falling off a platform (which will happen quite a bit in the later stages), you are not required to start entirely over.  In fact, you usually start just a few moves back since the game has a great built in checkpoint system.  After each completed stage you get graded.  You can always go back and play a previous stage if you would like to in order to increase your original score.  This game really offers a tremendous amount of replay value and gives puzzle lovers and casual gamers alike an excellent iDevice gaming experience.