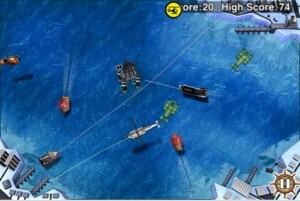 One major different that sets this game apart from other collision avoidance games is the use of multiple levels of traffic. For example, in the Atlantis level, the entire map is underwater, so the different types of vehicles are a submarine that floats and a rover that crawls across the bottom of the ocean. This means that the two types of vessel can cross paths without hitting. You can also anchor or stop a vehicle by tapping on it.

Harbor Havoc 3D features four levels, not only with different scenery but with different vessels and challenges. The Lighthouse level is set at night time and the only light is the rotating light on the lighthouse itself. This adds a huge level of difficulty but shows the inventiveness of Backflip Studios. 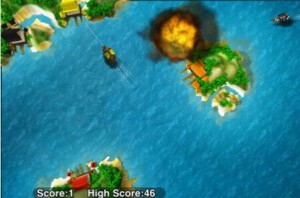 The graphics are very detailed especially for an iPhone game. The 3D in the name is mainly from the shading on the graphics that give them a 3D feel. The entire Atlantis level is covered by water so there is a constant wavy watery look. The vehicle graphics are what really impressed me. Although they are the smallest part of the game (visually), they seem to have to most detail.

The controls are the same as many other collision avoidance games with the excepting of tapping to stop the vehicle. Tap on a vessel and drag to the appropriate dock or bay. If you drag incorrectly the white direction line you just drew will turn red and you will have to try again. When you tap a vehicle, its specific destination will light up so you don’t make the mistake of leading it to the wrong place. 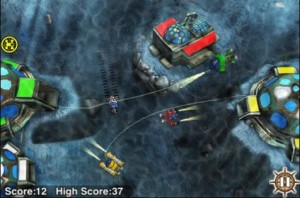 If you like collision avoidance games then you really need to quit reading this and buy Harbor Havoc 3D. It’s only $.99 and you have four cool levels and not to mention the addition of multiple level trafficking.