Kodix is a puzzle game where you must match a hidden sequence of pegs. Does this game kind of sound familiar? Well if you have ever played the board game Mastermind then you already know the idea behind Kodix. 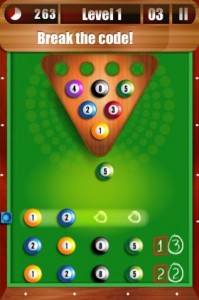 If you have never played Kodix or Mastermind, then allow me to explain. The object of the game is to match different objects (Mastermind uses colors, Kodix uses things like billiard balls, screws, and coffee beans) in the exact order that the computer places them. For example, on the first level of difficulty (four objects), the computer will randomly choose four objects from six different objects. To figure out the code you must select from the six original objects to try to solve the puzzle. After you play each row, numbers will appear on the right side of that row. They tell you how many correct objects you used and how many of those objects are in the correct spot. The left number indicates the number of pegs that are the correct object and in the correct spot; the right number is for objects that are the correct color but not in the correct spot.

In the recent past, I reviewed an iPad game called Ultimate Mastermind HD and my biggest complaint was the lack of creativity when it came to visuals. I do not have this complaint with Kodix. I think the different themes are brilliantly done. Every theme (billiards, screws, coffee, and light bulbs) has its own sound FXs and music that fits well with the visuals. However, the buttons and menus don’t live up to the quality of the themes. They seemed overlooked and less prepared. 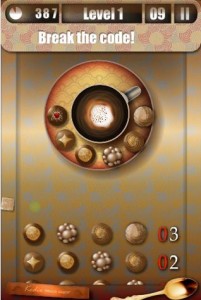 The controls are very easy to learn. All you have to do is tap on an object to choose it for a row or you can tap and drag, either from the objects at the top or from one of the previous rows. One complaint I have is that the objects to choose from are way above the rows you have to play, so you have to keep sliding back and forth trying to figure out the code. Also, I kept accidentally selecting the wrong object. I don’t know if that was me being clumsy or because they are to close together. 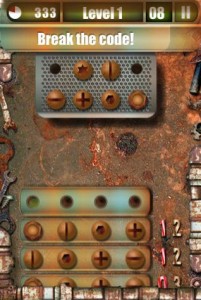 If you are in the market for a code breaking Mastermind type game Kodix is better than the previous game I reviewed. However, this game still has a few holes; a graphical fix for the buttons and menus would really take this game to the next level and moving the puzzle piece so scrolling is minimized would be great. There are different levels of difficulty as you progress through the game so it does get harder and more challenging. The iPhone version will run you $.99, but the iPad HD version is $2.99.