Welcome to Shifting Sands, a puzzle title which resembles those wooden labyrinth marble games you might have enjoyed as a kid. You’re character and tour guide through these mazes is in fact Shifting Sand, a mustardy yellow splotch with googly eyes and an expressionless mouth. Although not without its quirks, LagMac Studio created a basic, yet somewhat entertaining title. 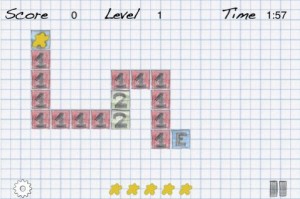 It’s difficult to argue with the $0.99 price tag, especially with so many overpriced games flooding the iPhone game market. Shifting Sands features essentially one game mode, where you hold the device flat, and cautiously tilt different direction to control your character. Falling off the laid out path costs you one life, and each square must be covered a specific amount of times, which is clearly marked in the graph paper looking layout. After five lives, it’s game over, and the “excitement” is finished.

Shifting Sands is basically a doodle style game with partially hand drawn graphics which appear colored in with colored pencils on graphing paper. There isn’t any animation, just the splotch traveling along the twisting path while trying to avoid falling to its doom. After the two minute time expires or a lost life, an Apple window pops up asking if you’d like to continue or quit. 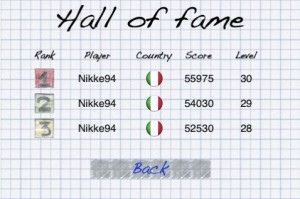 Staying the course of remaining remarkable simple, the background music is highly MIDI-esque, with floating keyboard melodies which remind me of an old Genesis-era game. After each block is successfully passed, a little ping noise signifies the achievement as you progress along the winding road. There’s also a decent “wah-wahh” effect after a failure, again reminiscent of an old school gaming title from childhood.

The absolute success or collapse of this game rests almost solely on the control. While it can be a touch hyper sensitive, the developers were slick enough to include a calibration option, as well as a slider for overall sensitivity. After a few rounds, you should be able to get the hang of things, although the game is still somewhat difficult. If you aren’t falling all over the place, you’re becoming stumped with the various puzzles, which leave you little time to solve. 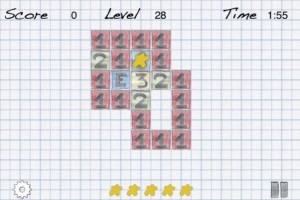 Shifting Sands isn’t necessarily a poor game; it just fails to deliver a reasonable amount of entertainment for an app which requires purchase. Sure, it’s only $0.99, but I’ve discovered plenty of games for free that held my attention longer than this one.  Kudos to LagMac on the control options and calibration, but I just can’t really justify spending money on simplistic doodle games.