Mike Tyson’s Punch-Out!! for the NES is one of the most beloved games from the NES era.  In Super KO Boxing 2, Glu Mobile brings a re-imagined version of that classic to the iPhone and iPod Touch market.  With over 15 wildly different opponents, this game has a good amount of fun and challenge to be had, if you accept that it’s not so much a boxing game as a memory and timing battle. 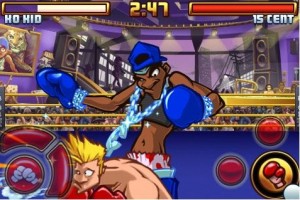 If you remember Mike Tyson’s Punch-Out!! then you’ll remember that the game revolved around you taking Mac from being just an amateur boxer to the world’s greatest (eventually fighting Mike Tyson for the Belt).  In this game, you start out as the KO Kid and begin the long process to the title belt.  Each opponent gets progressively more difficult to fight but once you reach the fourth or fifth character in the game, it becomes impossible to win a round without really working on ducking at the perfect time and countering at the exact right second.  Each opponent has different special punches and each one requires that you duck at the exact right moment in order to be able to damage them at all.  This makes the game tougher but also a bit stiffer than I would have liked.

Any game that offers up a variety of strategies to win is always going to find a place on my iPhone.  Unfortunately this game doesn’t really give you that opportunity.  Instead, there is one method alone that will allow you to win matches (especially as you get further along).  Once you beat a character you unlock that character to play in Versus mode which allows you to unlock further achievements.  The game also offers up an exhibition mode (which allows you to play one-off bouts).  But the main thing you’ll be doing is trying to play through the Circuit and beat the 15 opponents in order.  Trust me when I say this will not be an easy task. 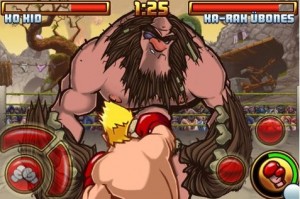 The graphics within the game are really well done.  All of the characters and the background are extremely colorful.  At one point you’ll be punching the lights out of an alien while in the background baby flying aliens go flying by.  It certainly is imaginatively done and brings a lot of fun to the game.  There is also a bit of humor thrown in here and there between rounds.  The sounds within the game are also well done and you can even listen to your own iPhone or iPod Touch play list as you punch some heads.

Unfortunately the controls are hit and miss.  Your ability to dodge a punch effectively is of the upmost importance in this game but for some reason, the dodge buttons (there are 2) don’t always work on every touch.  There are 2 main punch buttons and one special punch as well.  These work fairly well.  It is worth mentioning that the developers have added an in-app purchase of ROID RAGE which allows you basically to destroy every computer in the game without any skill whatsoever (no need to duck or block).  It cost .99 cents for 3 uses and if you want to use it again, you have to pony up another .99 cents.  Personally I don’t see the point for having achievements (for winning the game) if you can buy your way into winning the game.  Depending on who you are, this may or may not really turn you off from buying this one. 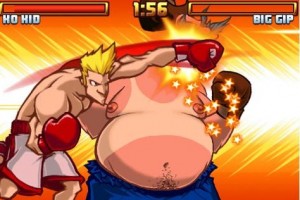 In the end, this game has a quite a few redeeming qualities but is not without its flaws. The controls can be hit or miss and despite the incredibly colorful characters, the gameplay itself eventually evolves to strategic timing and memory without a lot of ability to play around and figure out your own way of winning a match.  All in all though, if you’re looking to relive the olden days of Mike Tyson’s Punch-Out!! fun, this is a decent pickup for the iPhone and iPod Touch.