The Twiggles is a 2D puzzle game that is very much like the classic PC game, Lemmings. The object of the game is to help the little blue characters, the Twiggles, get to the end of the level, which is a swirling warp like object. 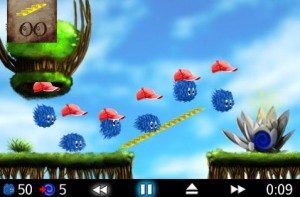 Each of the first five worlds has six levels. The final world, number six, only has three but these are the hardest ones to pass. Each level has a different challenge, some have pits that you must climb over and some have rock walls that must be blown up. To help you navigate the Twiggles through each level you are given object that you can place anywhere on the map. These objects consist of ramps, bridges, pillars, trampolines, and even bombs. You do not start each level with an unlimited amount of these objects you may only be given one ramp and one bridge to complete the level.

The graphics are of a fairly high quality. The Twiggles themselves have quite a bit of detail for only being little furry blue balls. I also really like the idea of giving them different hats on every level. It adds a funny touch of individuality to each one. The audio is also nice. The music isn’t overbearing at all and the tone of the music fits well with a puzzler like this. As far as sound FX go, the only one I really picked up on was the popping sound when you place an object. 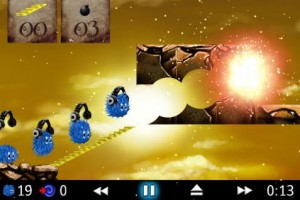 The controls are all touch based. There is a control panel at the bottom of the screen with fast forward, play, pause, menu and rewind buttons. If you get into trouble and too many Twiggles die then all you have to do is rewind the level back to where the mistake happened.  To use an object simply touch the icon in the upper left corner and drag the ramp (or whatever object you need), to the necessary spot. 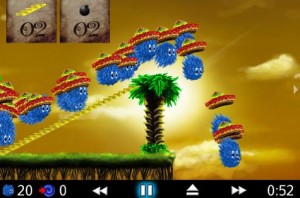 I grew up playing Lemmings. I love that game. The Twiggles is close but not quite to Lemming’s level of gameplay. During gameplay it is hard to scroll (the levels are bigger than the screen) quickly and place objects. I wish there was a zoom out so you could see the whole map at one time.  At $1.99 I would buy it, but I really like these types of games. If you weren’t a Lemmings fan you should probably pass, but if you are then you should really get The Twiggles. There are tons of levels and the later ones will certainly keep you entertained with how challenging they become.